Due to technical difficulties due to an operator error Feline Friday has become Feline Saturday or Sunday.  It works much better when I remember to hit the "Publish" button. :-)  Now here's Adam!


Adam is wonderfully handsome brown tabby with a unique marking on his face around his nose!  He is outgoing and likes being around people. He frequently comes out to greet visitors when they arrive.   He is also pretty laid back and gets along with the other cats in the shop. 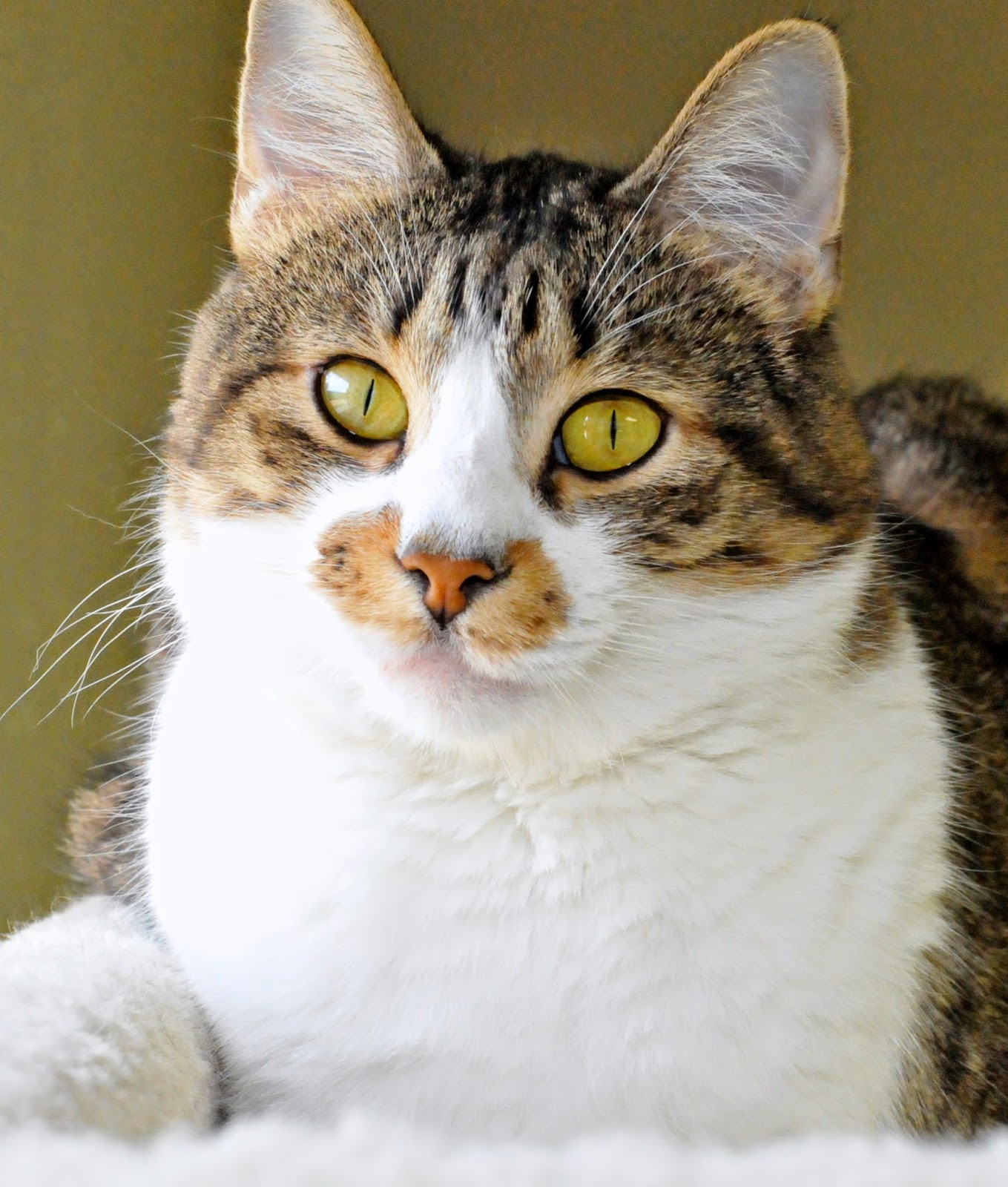 He is about 4 years old, is healthy, and has been neutered and microchipped.   When he is adopted the new owners contact information will be registered with HomeAgain and his first year’s registration will be paid for by StreetCats. 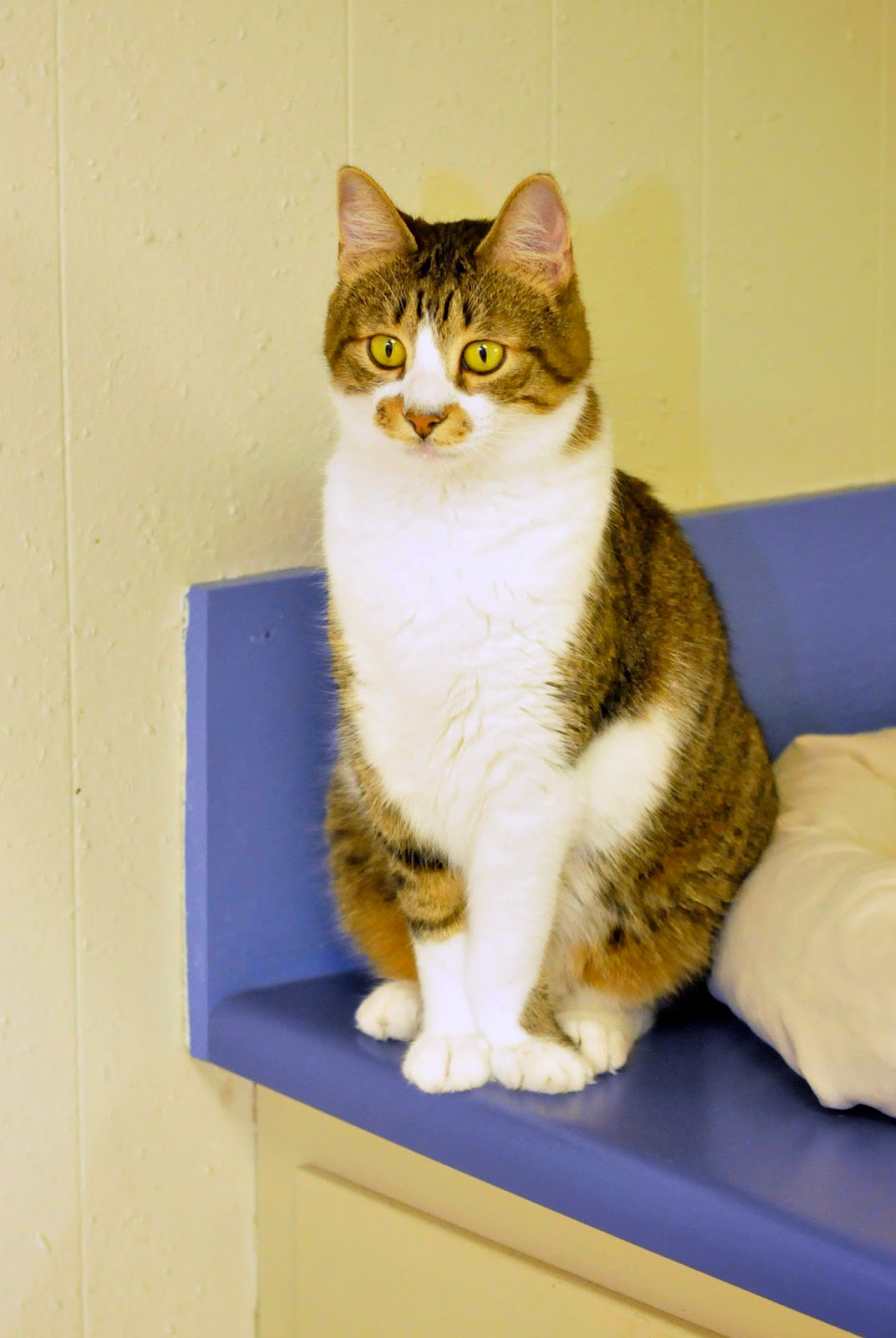 Adam was very cooperative while I took pictures of him.  This next one is my favorite. 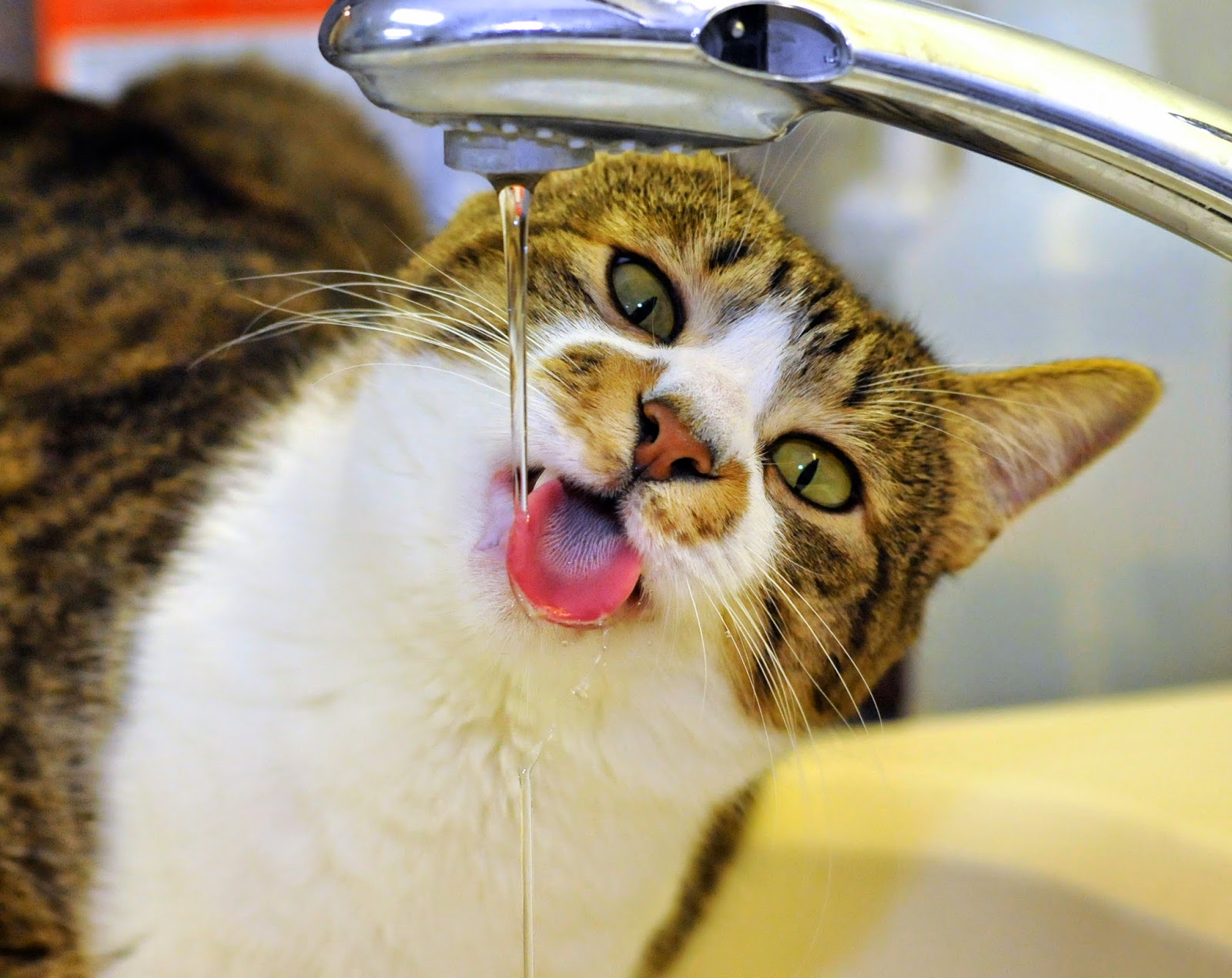 I did a little research.  This is what I found out about how a cat's tongue functions while the cat is eating and drinking.  If you look at the picture closely you can see the details discussed in the quote below.

“Under a microscope a cat's tongue has papillae with tiny backward facing hooks that rasp like spines. Without these a cat would not be able to groom properly nor eat meat efficiently.”  Senior Cat Editor, Mike Laudner,  of the online magazine, The Pussington Post,

He also goes on to explain how a cat drinks,  “Slow motion photography has revealed the remarkable way a cat drinks. The cat first simply touches its tongue against the surface of the water. The water sticks to the tongue by surface tension. The cat draws it into its mouth before gravity pulls it back down to the bowl. This action is quickly repeated to create what we recognise as lapping. Without very precise timing and a rough sticky tongue this would not work and the whiskers would get wet. It’s another reason to consider our cats the most extraordinary of creatures. “

I'll have to ask a scientist how the stream of water reforms itself even after being interrupted by the drinking cat's tongue. 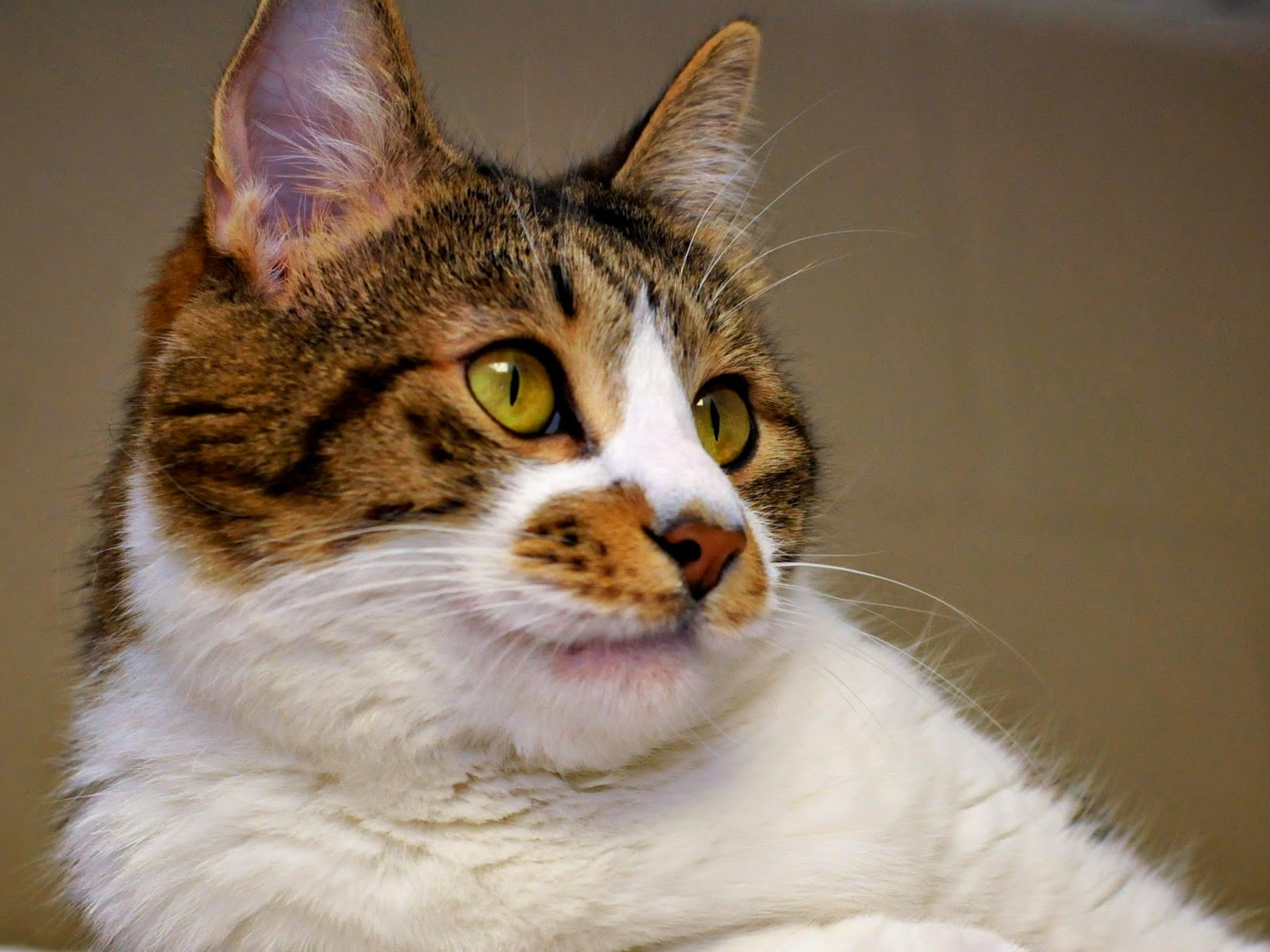 Adam would be a great addition to anyone's home.  If you would like to meet him,  and our other cats,  please come by StreetCats anytime between 10:30 and 5:00 Tuesday through Saturday.  It's located at 6520 E. 60th St, in Tulsa,  or call our message line, 918-298-0104 with any questions that you may have about adoptions from StreeetCats.

Posted by Vickie Sanborn at 8:37 AM No comments:

Recently while I was at the shop photographing our kitties I caught our Vanna sleeping on the job!   She acts as my photography assistant while I work and is usually very good with suggestions and keeping the other cats in line and cooperative.  But this day, while guarding my equipment, while I worked in another room,  she fell asleep on the job.  I'm sure that she'll be very unhappy if she finds out that I posted this, all be it adorable, picture of her caught in the act. 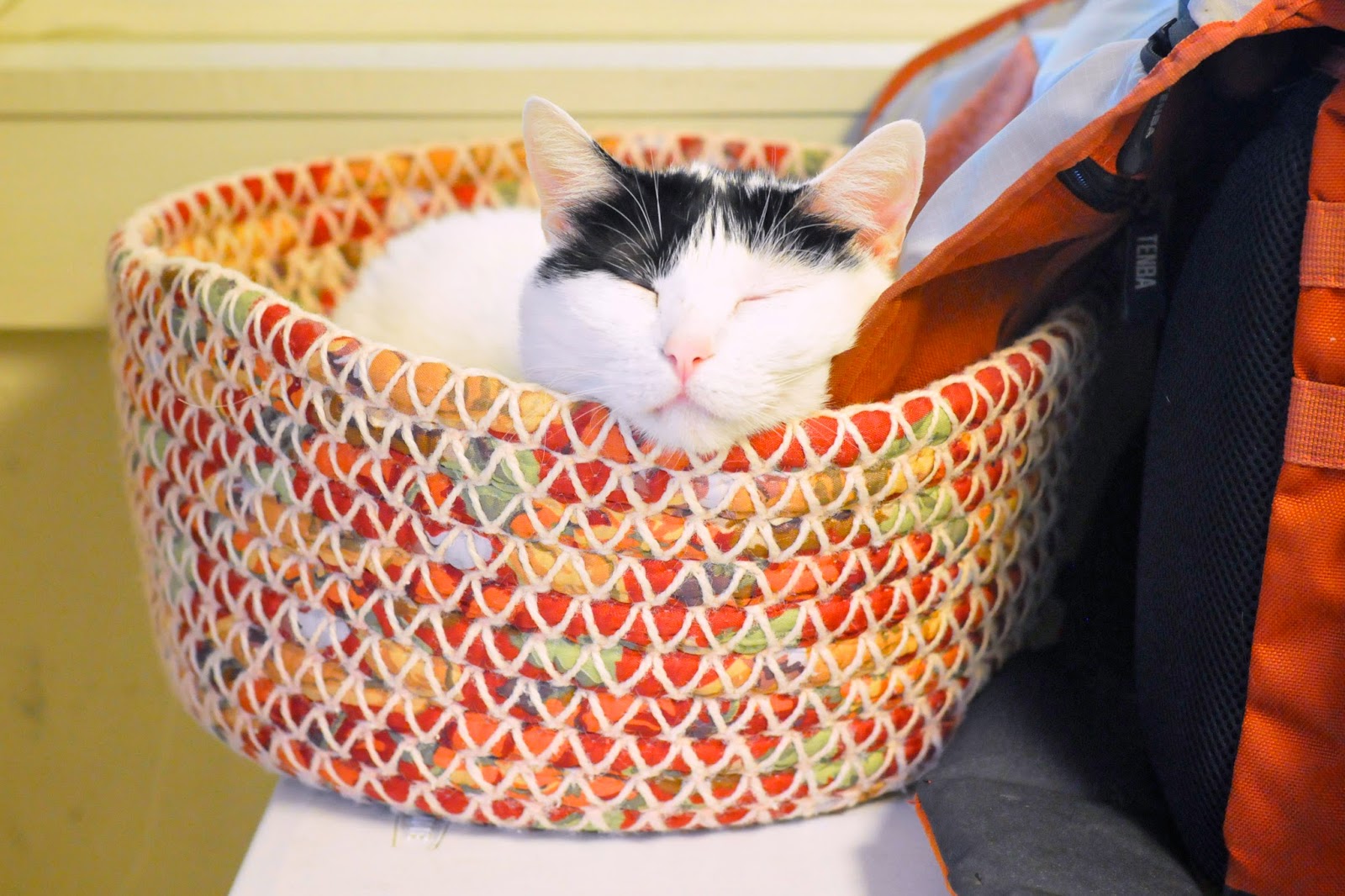 Normally she is right on top of things. As office manager, blogger and photographer's assistant she keeps very busy and really runs a very tight ship, so to speak.  But every one needs a nap now and then and this day she got hers a little early.

I think she might prefer this photograph that shows off her beautiful green eyes. 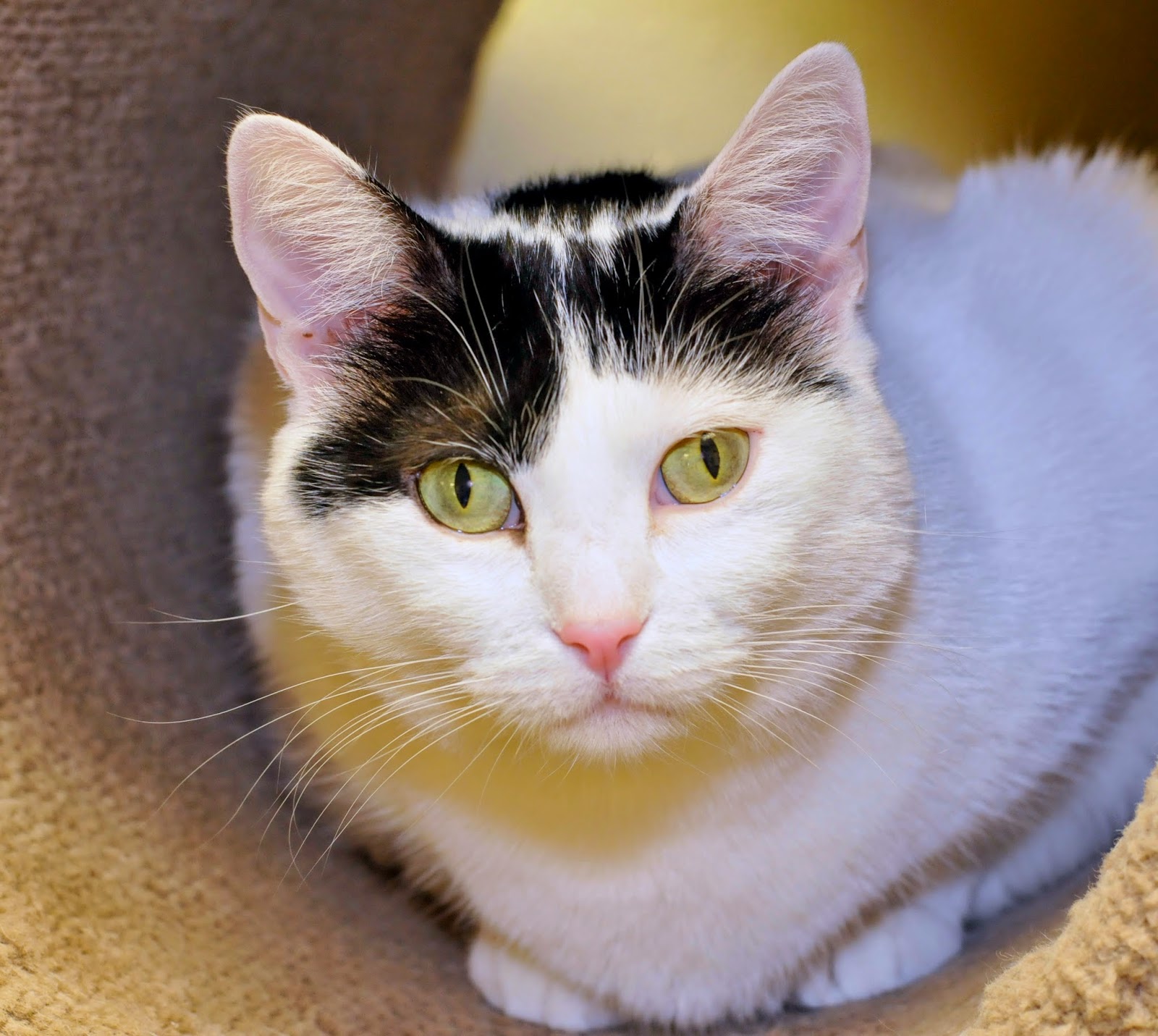 Vanna is sure that she will be adopted any minute, but just in case you are interested in meeting her first you can find her at StreetCats located at 6520 E. 60th St, in Tulsa, 10:30 - 5:00 Tuesday though Saturday, or call our message line, 918-298-0104 with any questions that you may have.  We would love to show you around and introduce you to Vanna and I’m sure that she would love to meet you, too! 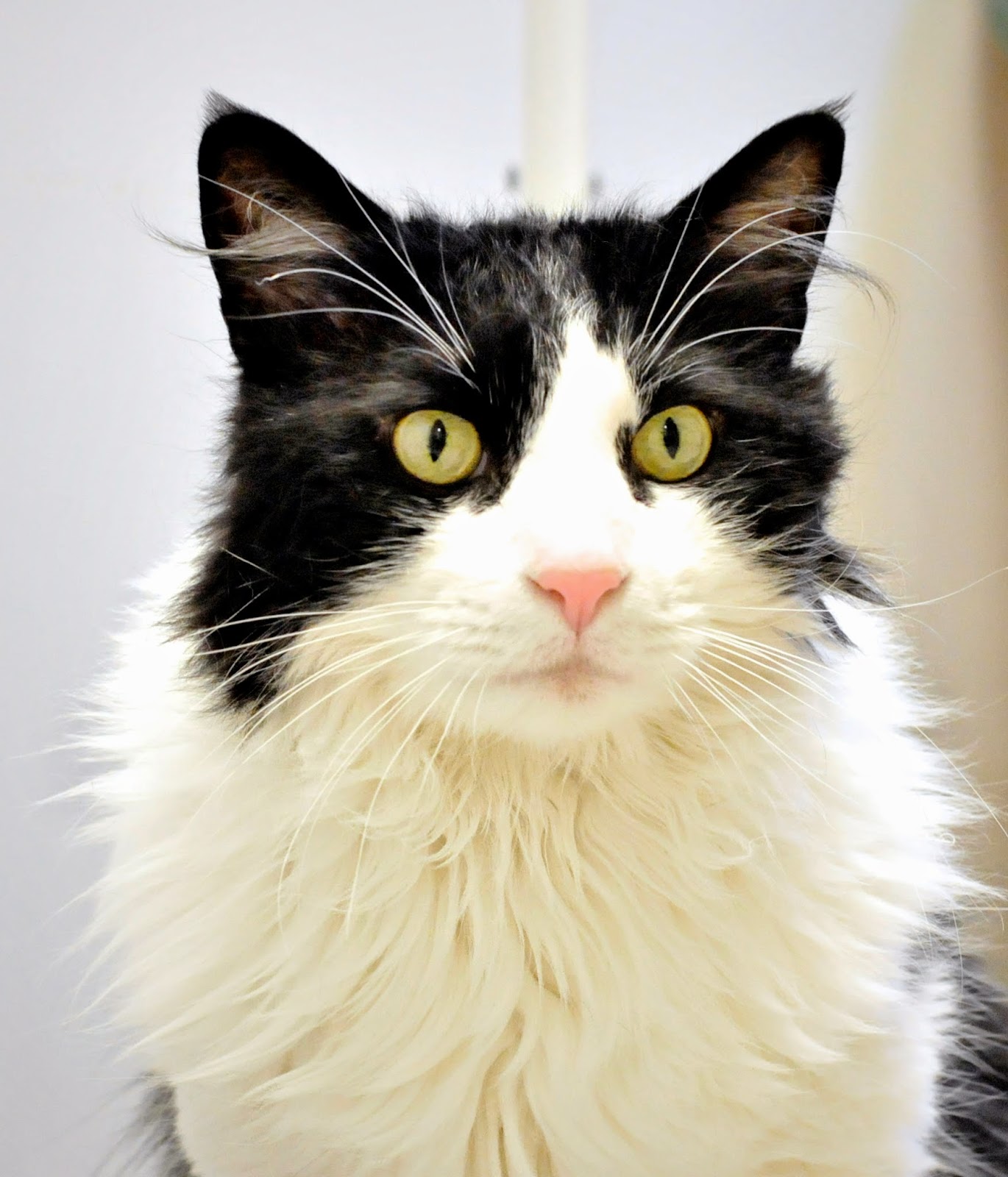 Meet Truman!  Truman is a very sweet and affectionate male kitty.  He looks very distinguished with his long black and white coat.

Other words to describe Truman are laid back and friendly.  In his previous home and in his foster home he was friendly with other cats and dogs, too! 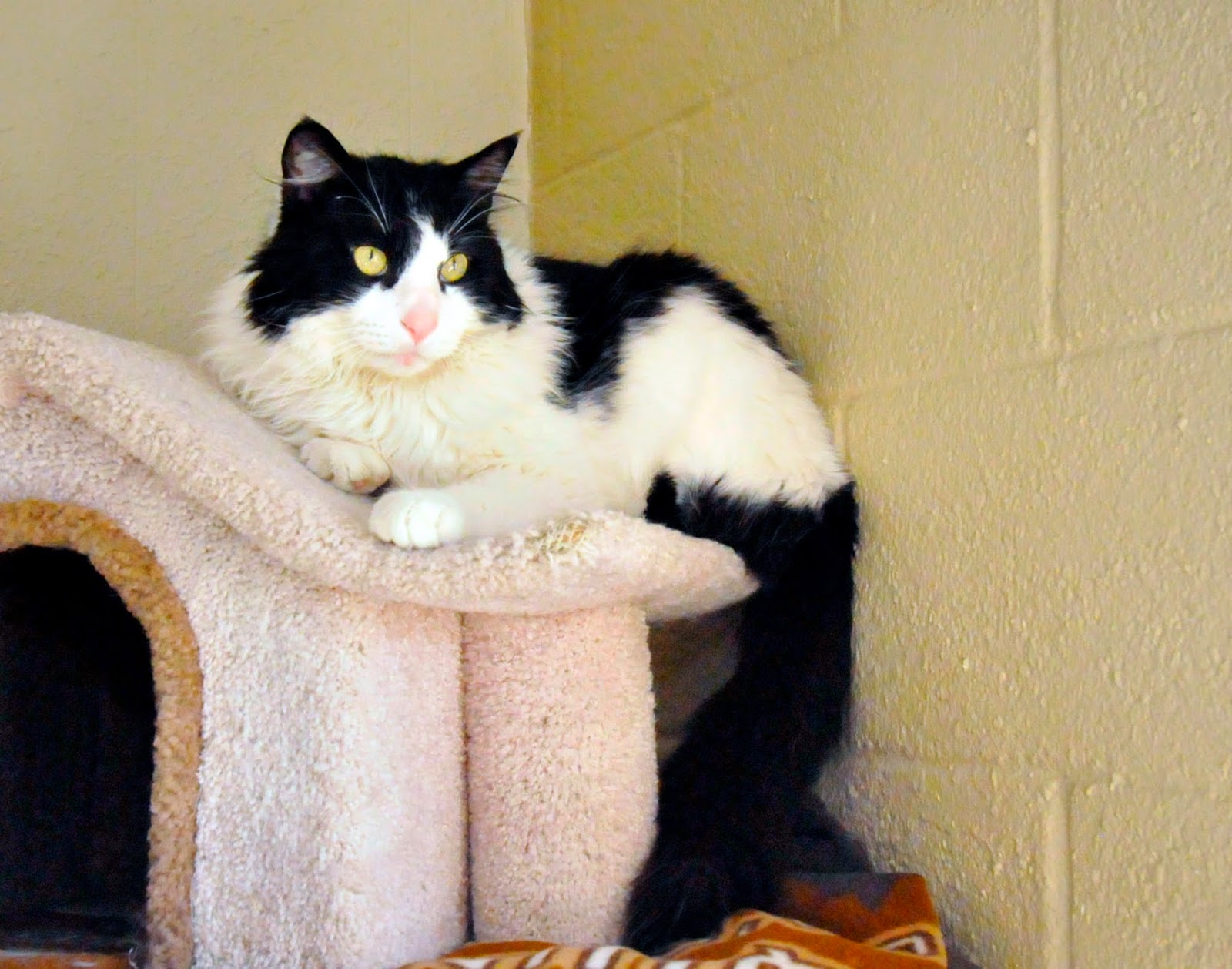 Like most kitties he might take some time to get used to a new home.  Often kitties hide when they first come to a new place.  His foster care taker said that he did just that, but after a few days he became accustomed to the new home and finally ventured out.  He then showed just how sweet and affectionate he really is.  His foster caretaker said that he wanted to be near her most of the time and that he loved to sleep on the bed with her. 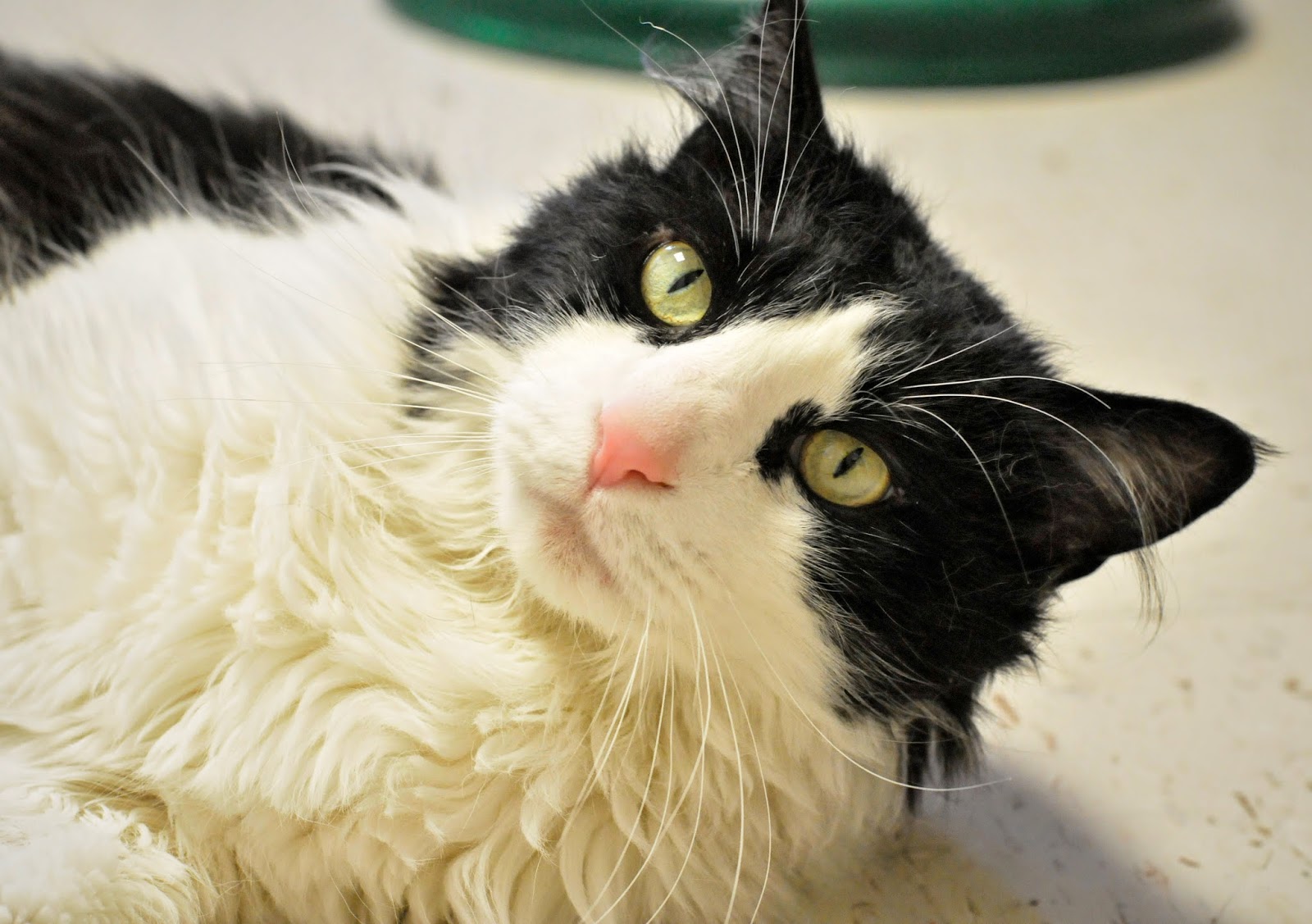 He is a healthy boy!  His birthday is approximately July 2005.  He has been to the vet, tested, and neutered.  When he is adopted his micro-chip will be loaded with the new owners contact information and the first year’s registration with HomeAgain will be paid by StreetCats.

Cleanliness is Next to . . . Napping!

Hi, everyone.  It's Vanna here!  And I can tell you that I'm so glad that my forever family is going to come this week and choose me as their forever cat.  Because I'm tired, especially of these contests and I just don't know how much longer I can continue doing this!  After the last contest, Best Eater, which I finally threw in the towel on, I thought I'd picked something easy.  But let's just face it!  Life is not easy!  Okay?!

Now . . . my contest.  First I will say that I told no one (shhh!) what the contest was so there was no more of "give me another chance!" to deal with.  This was all done surreptitiously!  That means on the sly, on the low down . . . okay, I was sneaky!  I decided this week to pick the kitty that is the cleanest!!!  Now how cool is that?!  Yes, I'll accept my praise right now, cool idea, huh?!  Because most cats are neatniks and spend up to 50% of their awake time in some form of grooming.  Now since cats sleep up to 18 hours a day, that may not mean much . . . 3 hours a day of grooming . . . but I think that would make a cat pretty clean, don't you?  Now not all cats are this clean!  StreetCats cats are, of course!  Kittens learn to lick themselves by two weeks of age, but cleanliness, even with neatnik cats, is a learned behavior and if Mom doesn't do a good job of teaching them to stay clean . . . well, kitty may not care much  about this praiseworthy attribute.  Anyway, it's been a busy week for me with lots of sneaking.  The cats around here are awake at different times and are, still again, cleaning themselves at different times.  That means I got very little rest while judging this contest.  But I won't whine because I know I'll be going home soon!

First, I could rule out Mischief immediately.  Mischief does like to be clean, but she is more interested in playing than anything else, even napping.  You see, Mischief is a kitten and she doesn't sleep as much as an adult cat does and I'm pretty sure she spends about 80% of her awake time, or maybe even 90%, playing!  One down, 13 to go!

So I took a look at Angel.  At first I thought she might be our winner because of how long her tongue is!  I mean that's got to make it easier right?!  Here, I'll show you. 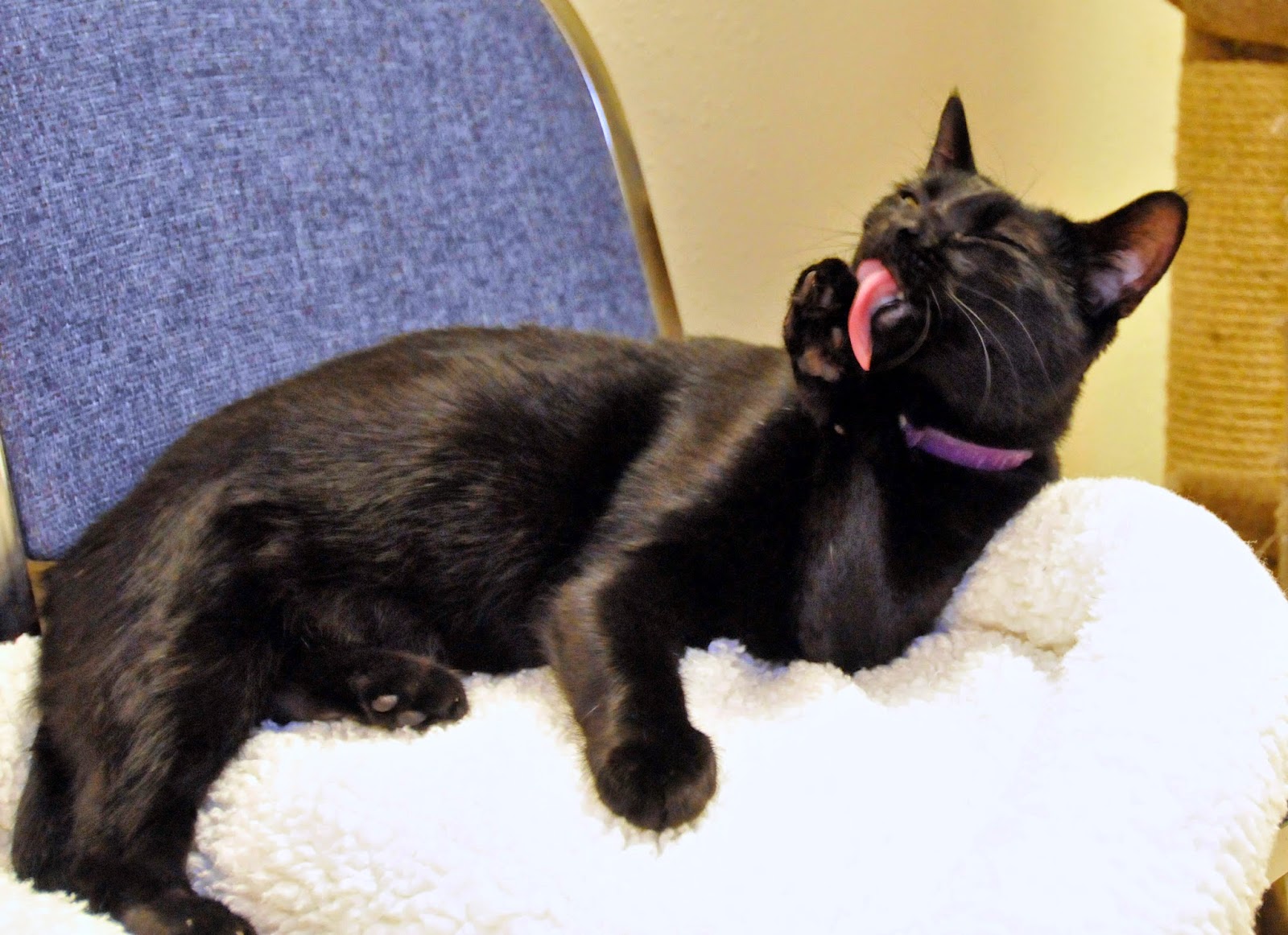 Ooohhh, you came close angel, but you're not the winner this week!

Then I thought for sure it would be Adam!  Adam is new here and he is sooo handsome!  Of course that didn't influence me in the least.  I wouldn't have even noticed, myself, but I heard someone else mention it.  No, not something I would notice! 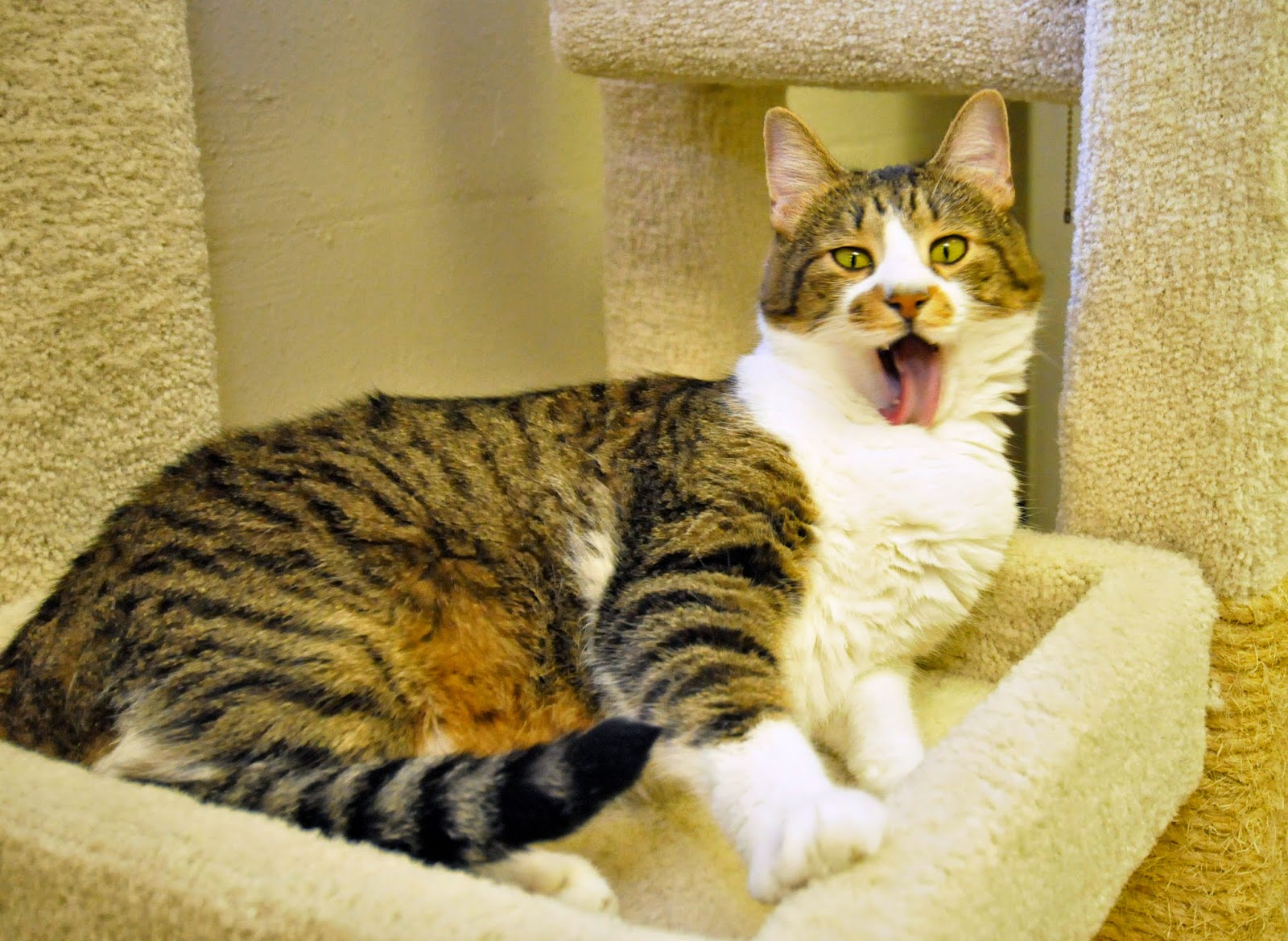 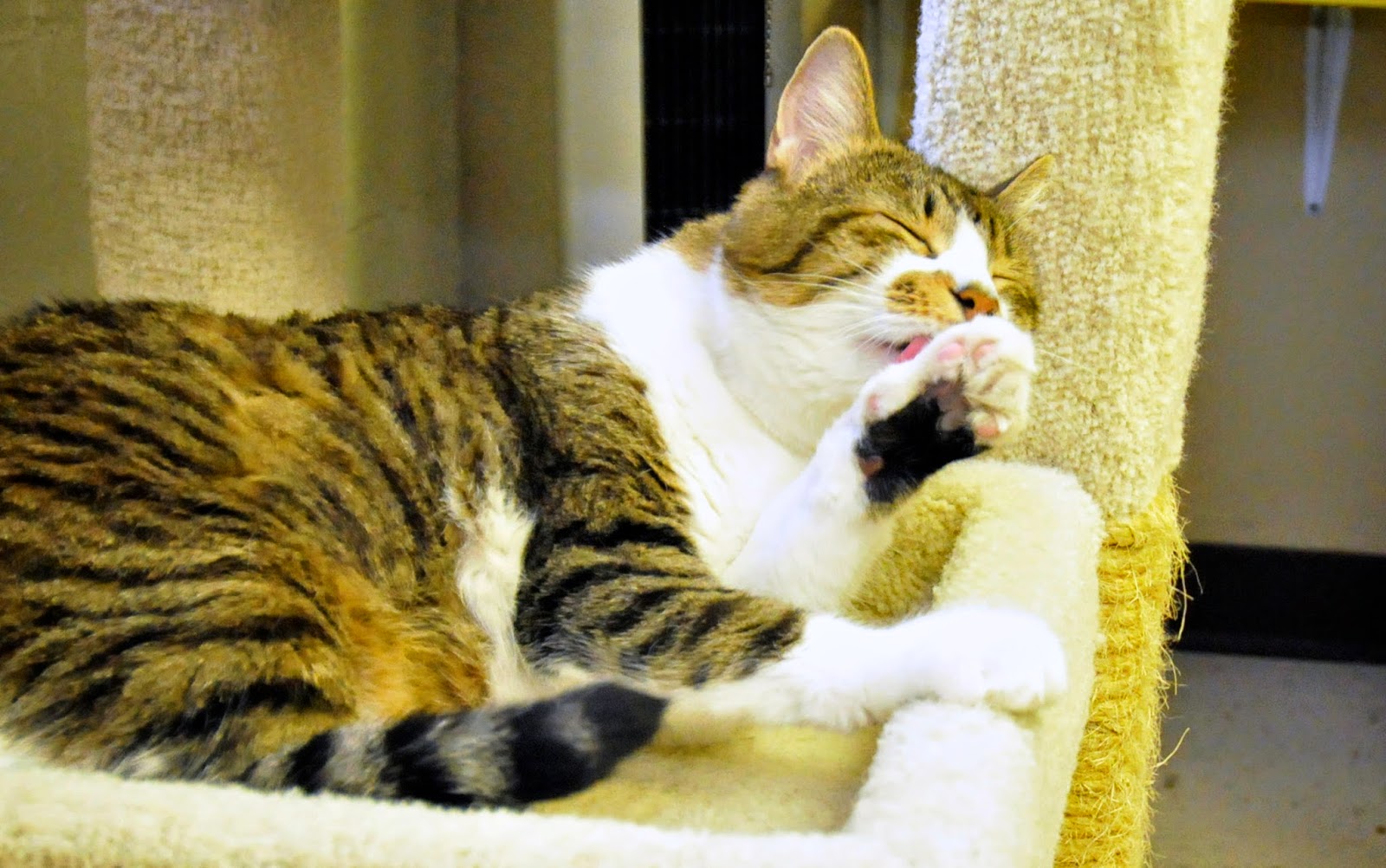 Oh my goodness, he's a pretty boy!  At least some of the cats think that.

Now I will tell you which cat won the contest for Cleanest StreetCats Cat.  Ta da!  No wait, first I need to tell you reasons why cats clean themselves.  To stay clean, of course!  But that's not the only reason.  I must admit that it's the only reason I knew of until I got on this magic machine that I use to write my blogs and it told me about these other things.  By the way, I HATE this machine!  Sometimes it works just fine, but when it doesn't work I don't have a clue what to do!  And then I have to call for help and it is just such a pain!  But I digress!  Back to cleanliness!

First, cleanliness is a barometer of feline health.  If a cat isn't grooming himself it could be a sign of illness!  And if she is grooming herself too much, well that could be a sign, too, of illness, either physical or emotional.  So pay attention, humans!  Also, just like dogs, cats don't sweat.  And they don't pant like dogs, either.  (If you see a cat panting, that means they're in big trouble and you need to get help fast!)  Instead cats rely on the saliva they spread on their fur to keep cool.  It evaporates to cool them off!  Plus if their fur is clean it is easier for it to stay fluffed, allowing air to circulate to the skin.

Now cats are also very methodical in their grooming and it was interesting to see how each of the StreetCats cats took their baths.  They would almost always start in the same place, usually their mouth and chin, like Adam in the picture above!  And then they follow a routine until their entire body is scrubbed.  I mean let's face it, we are so smart!  Now here is something I sure didn't know!  Grooming stimulates the production of sebum, which is an oily secretion produced by sebaceous glands at the base of each hair.  Licking then spreads sebum over the cat's hair and that lubricates and waterproofs the fur and makes it shine!  Ha!  Bet I just told you something you didn't know, didn't I?!

Okay, one more thing about grooming and then I'll tell you about our winner.  We can also use our grooming to remove loose hair (more about hair balls later!), prevent mats in our hair, remove dirt and get varmints like fleas or ticks off us.  I'm telling you there is no other animal that can even touch a cat in regard to how efficient we are!  I'm sure you agree!

Okay, here she is, Millie, the winner of the Cleanest Cat at StreetCats contest!  Actually, I don't know that she is any cleaner than anyone else, but she won because of her DOUBLE efficiency!  Here she is using one paw that she has already licked to wash her ear while cleaning her other leg!.  She's a multi tasker and in today's society that's a real plus!  And that's it, folks!  Bye, bye 'til next time! 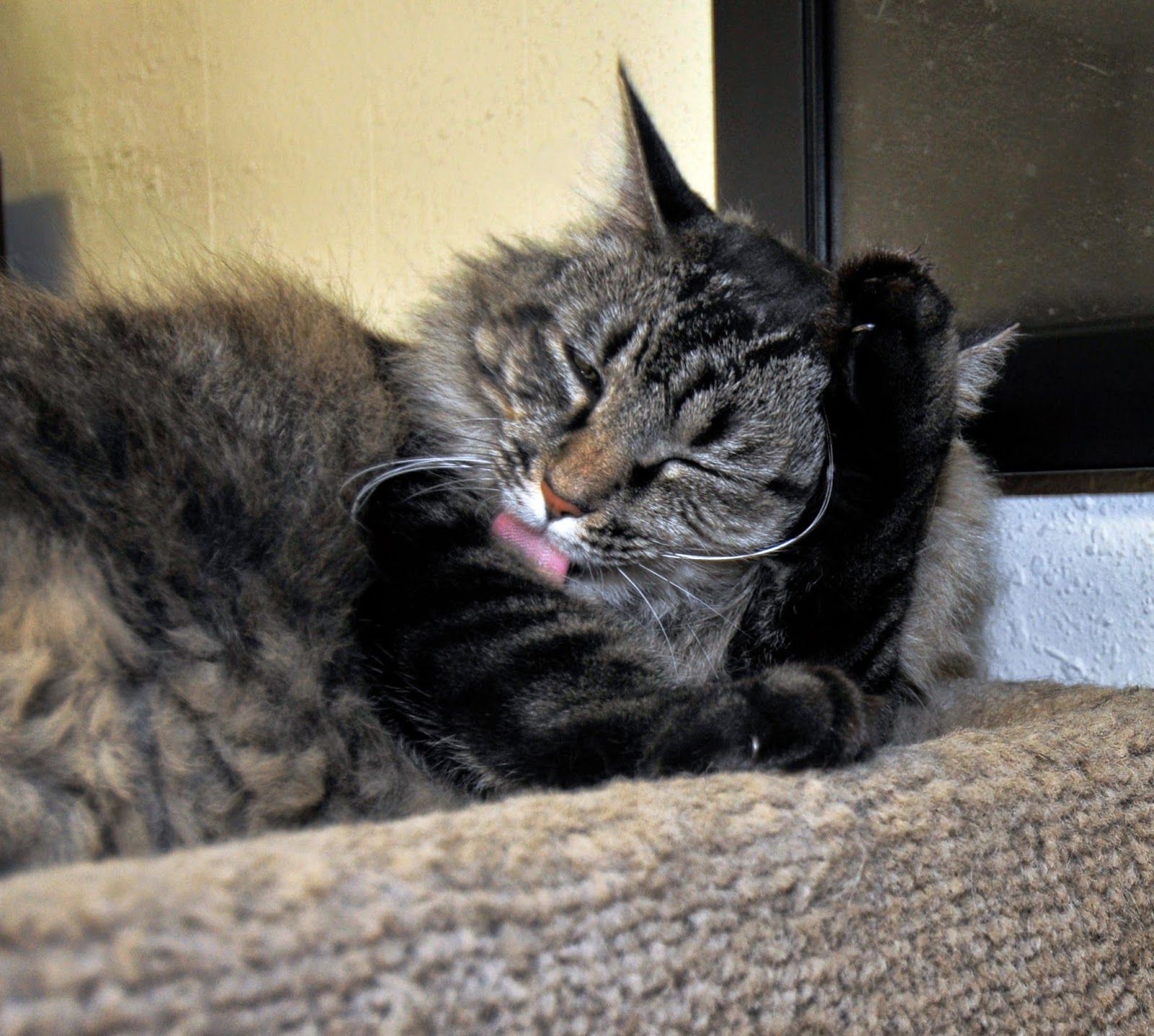