Let me introduce you to our little lady Scarlett!  Scarlett is a little over 1 year old and has a beautiful long haired black coat and golden eyes. 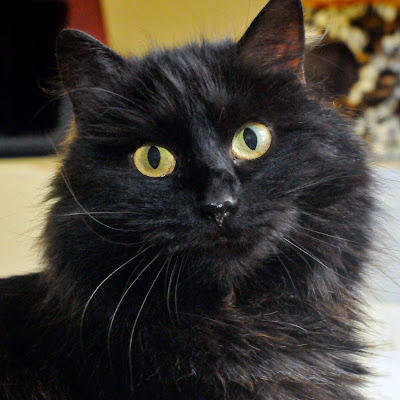 She is a little bit shy, but still affectionate.  I’m thinking that she will make great addition to someone’s family and give them as much love back as she is given. Scarlett was rescued by one of our volunteers. She is very sweet with people and seems okay with the other cats in the shop. 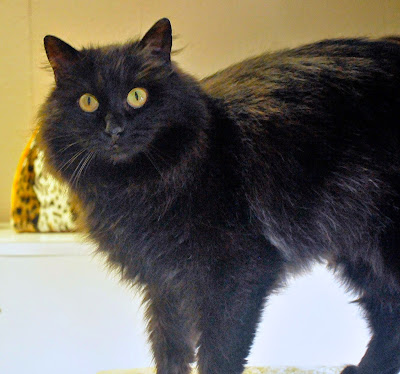 She is healthy!  She has been to the vet and has had all of the tests and shots that she needed and, of course, she has been spayed.  As a StreetCats kitty she has been micro-chipped, too.  When she is adopted her new owners' contact information will be put on it and the first year’s registration with HomeAgain, A Lost Pets Best Chance, will be paid by StreetCats. 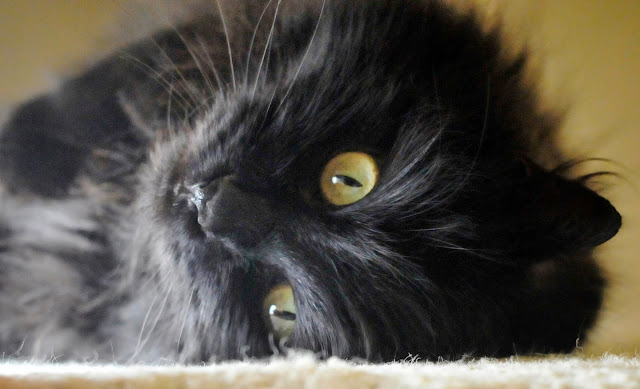 If you are interested in meeting Scarlett, feel free to come by StreetCats at 6520 E. 60th St, in Tulsa, 10:30 - 5:00 Tuesday though Saturday, or call our message line, 918-298-0104 with any questions that you may have.  We would love to show you around and introduce you to Scarlett and I’m sure that she would love to meet you, too!
Posted by Vickie Sanborn at 6:55 PM No comments:

The humans that hang around here decided to have a party and once again I was left to wonder exactly what is the point of being King.  Did they asked me what I thought of this idea?  Did they ask for advice about how to accomplish this?  DID THEY ASK THE KING'S PERMISSION???  Well, guess.  Of course not!!  By the way, this party was a "surprise."  I guess that's just one more curious thing humans do.  Except, get this!  It was only a surprise to one person!  Everyone else knew!  There are some human things that I guess I'll just never understand!

So the poor lady who was not even told about this party was Nancy Adams.  She's been coming to visit me ever since I got here and she loves me!!  And not just because I'm the king!  Actually she's been hanging around StreetCats for nine years now!  Wow!!  The very best thing about Nancy is that she adopted two StreetCat kitties.  Their names are Millie and Tiny.  Now Nancy has had cats her entire life, but she says these two are the sweetest cats she has ever had in her family!  Well, of course!!  They are StreetCats cats!!

And guess what else she has done.  She helped Samantha Polen when our famous StreetCats cat nip pillows were developed.  She has knitted dish cloths for us to sell so that we would have money for helping get wild cats spayed or neutered!!  Now that is really special!  But most special of all is that she has made six quilts for StreetCats to raffle at My Furry Valentine.  That's our primary fund raiser and those quilts brought in several thousand dollars for all our kitties!  Now that is so special that I'm going to show you a picture of Nancy with one of her famous quilts!  They are so beautiful! 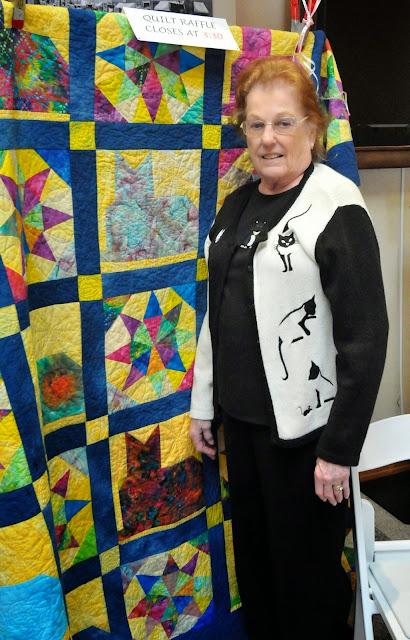 Now another thing humans like to do when they have a party is to eat cake.  Where two or more of those humans are gathered together, they will eat!  With gusto!  Let me show you the cake! 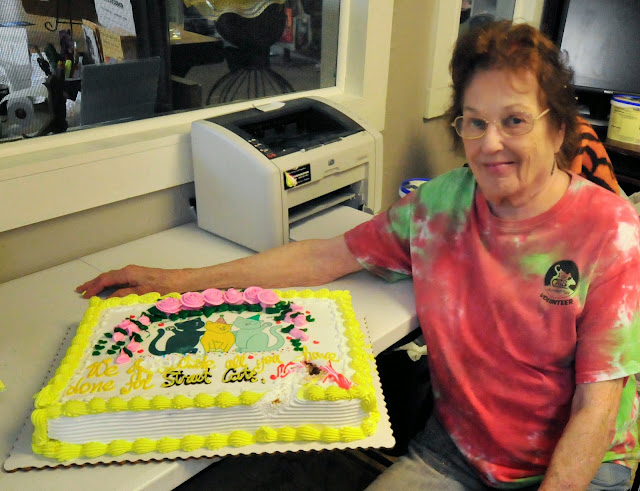 The colors are pretty cool, I think, and the choice of design, the cats, well that certainly couldn't be any better!!  I'm beginning to see the attraction of these parties, although I still don't get the surprise part of it!!

Now I know what you are thinking.  You're wondering where I was during this party.  Don't worry, there is no way I, the King of StreetCats, am going to let these humans just have the run of this place.  Take another look at the cake.  If you look closely, well maybe not even that closely, at the cake you will see the proof that I, King Truman, am not a king that can be run over.  So after I observed these shenanigans for a while, I decided to allow the party to continue.  And to communicate my approval, I put my stamp of approval on the cake.  In a couple of places!  Okay, I'll confess that having the party on my throne might not have met my approval, but I can be lenient.  Cary on humans!!
Posted by Unknown at 9:26 AM No comments:

Meet Glori!  She is a DS, or domestic short hair, and a very sweet one at that.  She is young at only about 7 months. 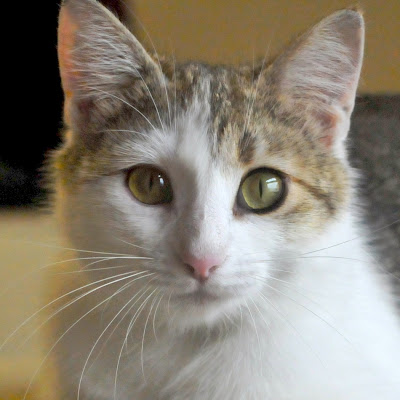 Like all young cats she loves to play with anything that she can chase, pounce on, or grab between her cute little paws.  She is a petit cat, but probably not quite full grown.

Even at her young age she has already had a litter of kittens.  She was rescued by one our volunteers and the kittens have all found new homes.

Soapbox time........I can’t emphasize enough the importance of spaying and neutering our cats.  Did you know that in 7 years one female cat and her offspring can produce ...hold onto your hats.....370,000 kittens! They all need loving homes but we know that most are not lucky enough to get one.  We at SteetCats want to be part of the solution not the problem.  For that reason all of the cats that come into our system are immediately spayed or neutered.

If you would like to read more about the benefits of spaying and neutering your pet please read this family friendly article which also includes a FAQ section.

Copy the following link and enter it into your browser. 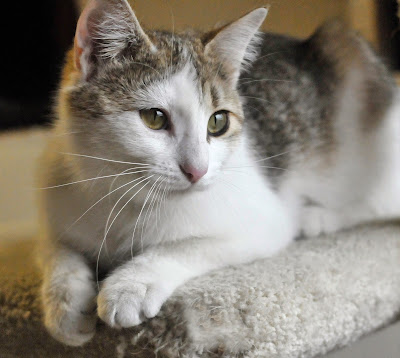 Glori has been spayed.  She has also had all of the tests, treatments, and vaccinations necessary to ensure that you are adopting a healthy cat.  In addition to all of the veterinarian support that she has had, she has also been micro-chipped!  When she is adopted the new owners contact information will be entered onto it and the kitty then registered to the HomeAgain pet identifier program.  Anywhere in the country your cat can have the chip scanned and then returned to you.  StreetCats pays for the first year’s registration. 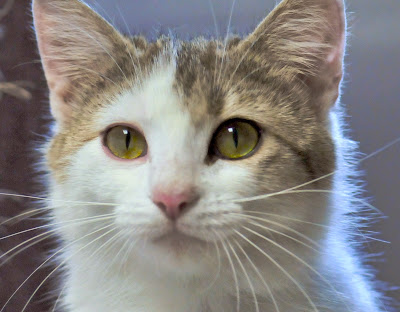 Just a side note here:  Ladies have you ever wondered why a lot of us wear eyeliner?  Check out Glori's eyes...one has eyeliner and one does not.  Which one stands out the most?  The one with eyeliner of course!
If you are interested in meeting Glori, feel free to come by StreetCats at 6520 E. 60th St, in Tulsa, 10:30 - 5:00 Tuesday though Saturday, or call our message line, 918-298-0104 with any questions that you may have.  We would love to show you around and introduce you to Glori and I’m sure that she would love to meet you, too!
Posted by Vickie Sanborn at 7:07 PM 1 comment:

WE ARE NOT AMUSED!

Yeah, yeah, yeah, I know I said I would appoint my court.  But being King is a lot of responsibility and I have to sleep a LOT in order to fulfill my obligations as ruler and protector of StreetCats.  But apparently I've been talking in my sleep or something because one afternoon I woke up from a nap to see Adam standing right in front of me doing this! 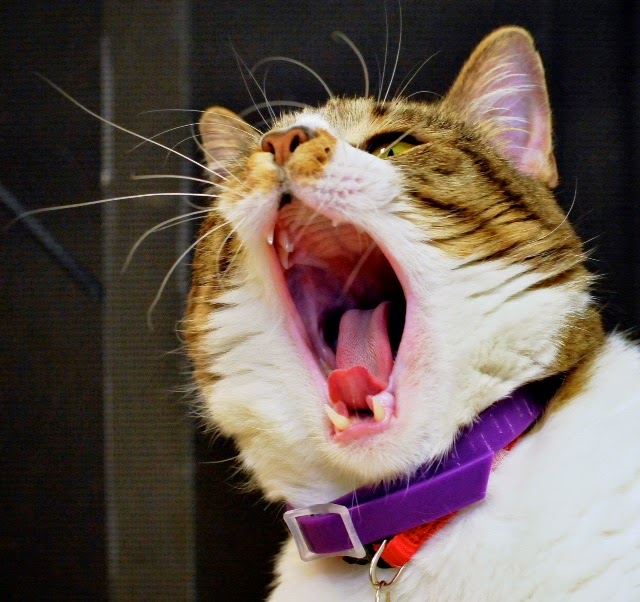 Well, you can imagine my reaction to this sight!  I about fell out of bed!  After regaining my composure I advised this rude cat to go someplace else to sleep!  Imagine my surprise when he told me he isn't sleepy, that he had heard I needed a court jester and he wanted to show me how big he can yawn and how entertaining it can be.

I barely got "go away kid, you bother me" out of my mouth before he urgently insisted I come with him to watch what else he could do.  Now he has to know how fortunate he is that I actually got up and followed him!  And oh what a fool I am!  I should be the court jester!  This is what he wanted to show me. 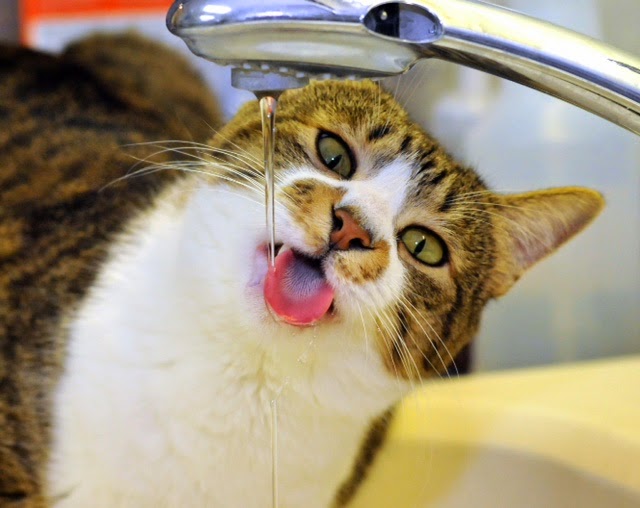 Are you kidding me?!  What's so amusing about that?  Cats, just like all creatures, prefer their water as fresh as possible.  And running water is fresher than water that's been sitting in a bowl.  Do you really think you're the first cat to figure this out, Adam?!  Maybe you are just so farsighted that you can't see the water in the bowl and that's why you learned to drink from the faucet.  In any case it does not qualify you to be court jester!

But Adam wasn't going to give up.  He had to give it one more shot!!  "Okay, okay, but look at my crooked foot!"  You have to admit that's funny!"  Different, yes.  Maybe just a little funny. 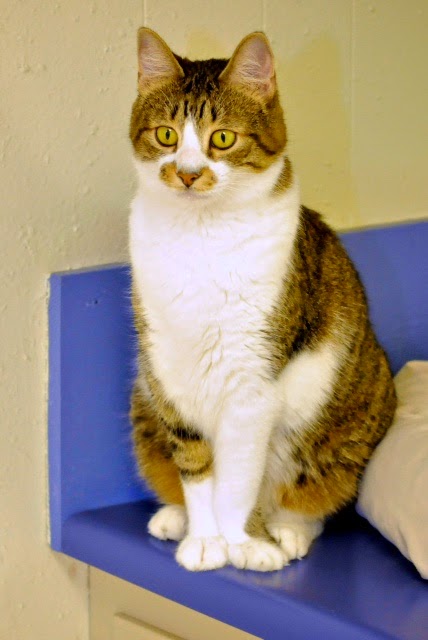 I'm sure it is as clear to you as it is to me that this cat is no court jester.  I doubt he could get a hyena to laugh!  But I didn't want him throwing a fit that I would have to deal with.  So I told him that I would need some time to consider this.  And I went back to my throne, also known as my bed.  And I'm thinking about it.  Pretty sure that position is still available.  Yep, pretty sure. 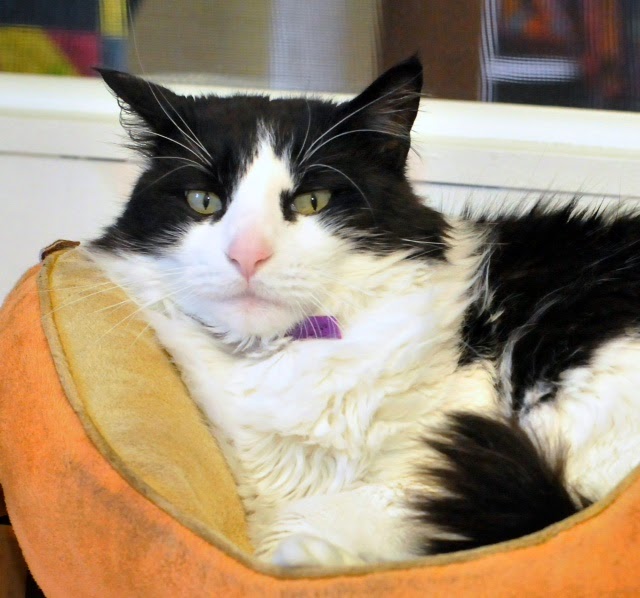 We are saying a fond farewell to the original creator of this blog, Ms. Lulu.  She made her journey across the Rainbow Bridge this week and we join her mom and dad in sadness at her passing.  And we thank them for giving her so much love!  Lulu, you were clearly a brilliant kitty and yes, your eyes were just as beautiful as you thought!  Once a Street Cat, always a Street Cat, even when you are living on the other side of the bridge.  I know you will represent us well in your new home and hopefully you will continue to gladly tolerate us humans who would rather be with you than with any other creature.  Do a good job of being the most important cat there!  We will miss you here! 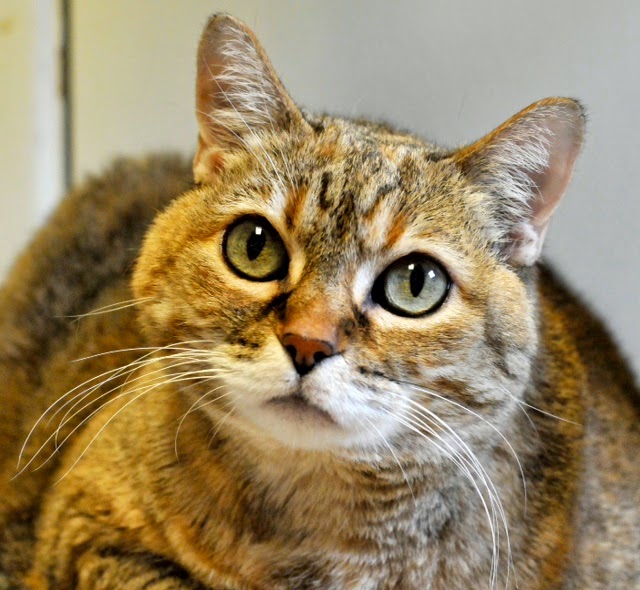