That's UNCLE, as in I give up!  This has nothing to do with my Uncle Al, who was actually a decent cat as far as I know . . . not that I knew him well.  This UNCLE is far more related to Sisyphus!  You know, as in a Sisyphean task!  As in WAIT, let me give this up, please!  Oh, some of you may not know who Sisyphus was, I mean if you're not into Greek mythology.  Well, Sisyphus, again in Greek mythology, not in real life, was a king who got in trouble with the god Zeus.   He was really a very bad, cruel king so I don't blame Zeus for being angry at all.  And you know these Greek myths . . . there are so many versions!  But the final outcome of this story is that as punishment for betraying Zeus. Sisyphus had to roll a heavy, immense boulder up a hill only to watch it roll back again.  And he had to do this not just once, but over and over again . . . forever!!!!

Now it's possible that you're wondering how this story has anything to do with me, Vanna, or with cats or with StreetCats or with this blog!  So I'm going to tell you and your sympathy regarding my Sisyphean task, which I have now officially abandoned, is greatly appreciated.  So . . . I've been trying to have one of my wonderful contests now for several weeks.  And, needless to say, it just really hasn't worked out too well.  And what, you ask, was this contest, Vanna?!  Well, I've been hinting at it for a few weeks, but I might as well just tell you.  It was a contest for the cat at StreetCats who is the Best Eater!  Now wasn't that a cool idea for a contest?  NOT!!

I guess my biggest problem with this contest was that no one was willing to accept defeat . . . that they, in fact, did not win.  They kept wanting to have another trial and then another and another.  I heard things like "Those are shreds!  You know I prefer pate!"  Seriously?!  Yes!  When I would tell them, look, it's all chicken, they would gag and throw up!  Okay, I will admit that a cat's tongue does react to the texture of a food, or how it feels.  That's one reason dry cat food sometimes comes in all shapes and sizes.  So . . . okay, we'll do it again with pate!

And these StreetCats cats are pretty spoiled, too.  One day I served tuna and shrimp for our contest and all I got from one cat was "the human helpers know I only eat chicken and you surely know that, too.  I demand a new contest!"  What?!

And even though cats HAVE to have meat because they need things that can't be found anywhere else, like taurine, vitamin A, vitamin B12, niacin and thiamin, some cats do like to have a bit of fruits or vegetables as an added bonus or treat!  Well, forgive me, please, if your meal did not include any carrots or strawberries!  It is what it is!

Now I'm going to show you how I did this.  Here you go!  You'll see that it was all fair!


Now in this picture you will see the white kitty, Miss Molly, looking at the food and commenting that it is shreds and not pate.


So I scooted it over there to her and convinced her to give it a try.  Big mistake and she says she'll not ever forgive me!  In the meantime Angel had started on her second bowl and I was ready to declare a winner!  But NOOOO, it wasn't fair!

Cats and cat food, cats and cat food!  Did you know that the pet food makers spend so much money trying to figure out what these finicky cats like that they can't even count it?!  They want the little darlings to gobble it up!  And so do our human helpers!  You should hear them when someone doesn't eat.  It's pitiful!  I'm going to plan a lesson, a reminder, on what it's like to live on the street!

So I just have one final thing to say.  There is no winner of the Best Eater contest!  I hereby declare myself exhausted and fed up (hee, hee! . . . fed up!  Get it?)  They can eat or starve from here on out as far as I'm concerned . . . up to them!  I am moving right on to another contest!  More about that later!
Posted by Unknown at 4:51 PM No comments:

This is our little Mischief! 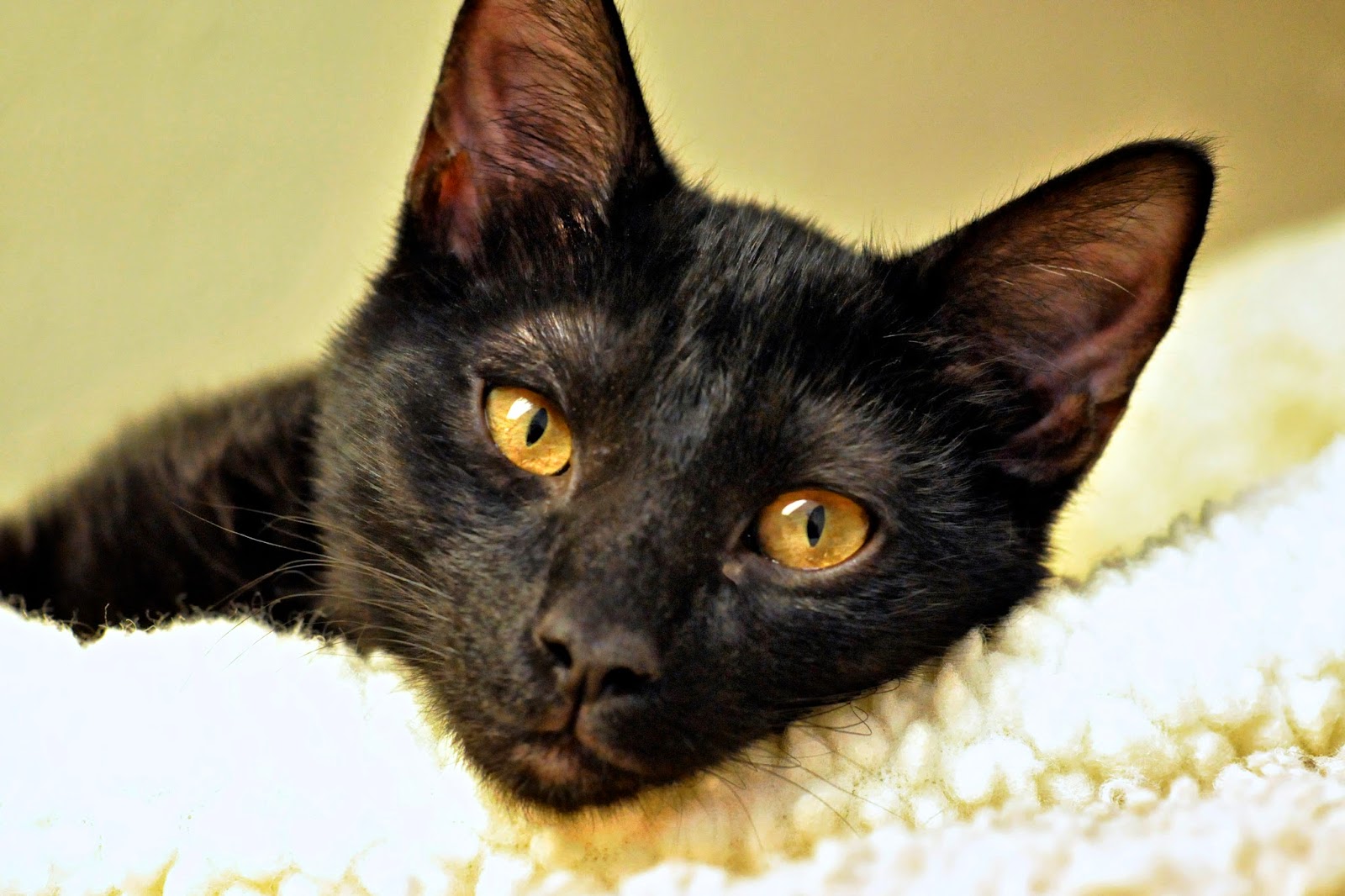 She is about 4 months old and is doing her best to live up to her name.  Photographing her has been a real challenge.   A few days ago, much to my surprise, I arrived at the StreetCats shop and found her sleeping.  Here she is waking up,  but still groggy, so she hasn't started jumping around and playing yet. 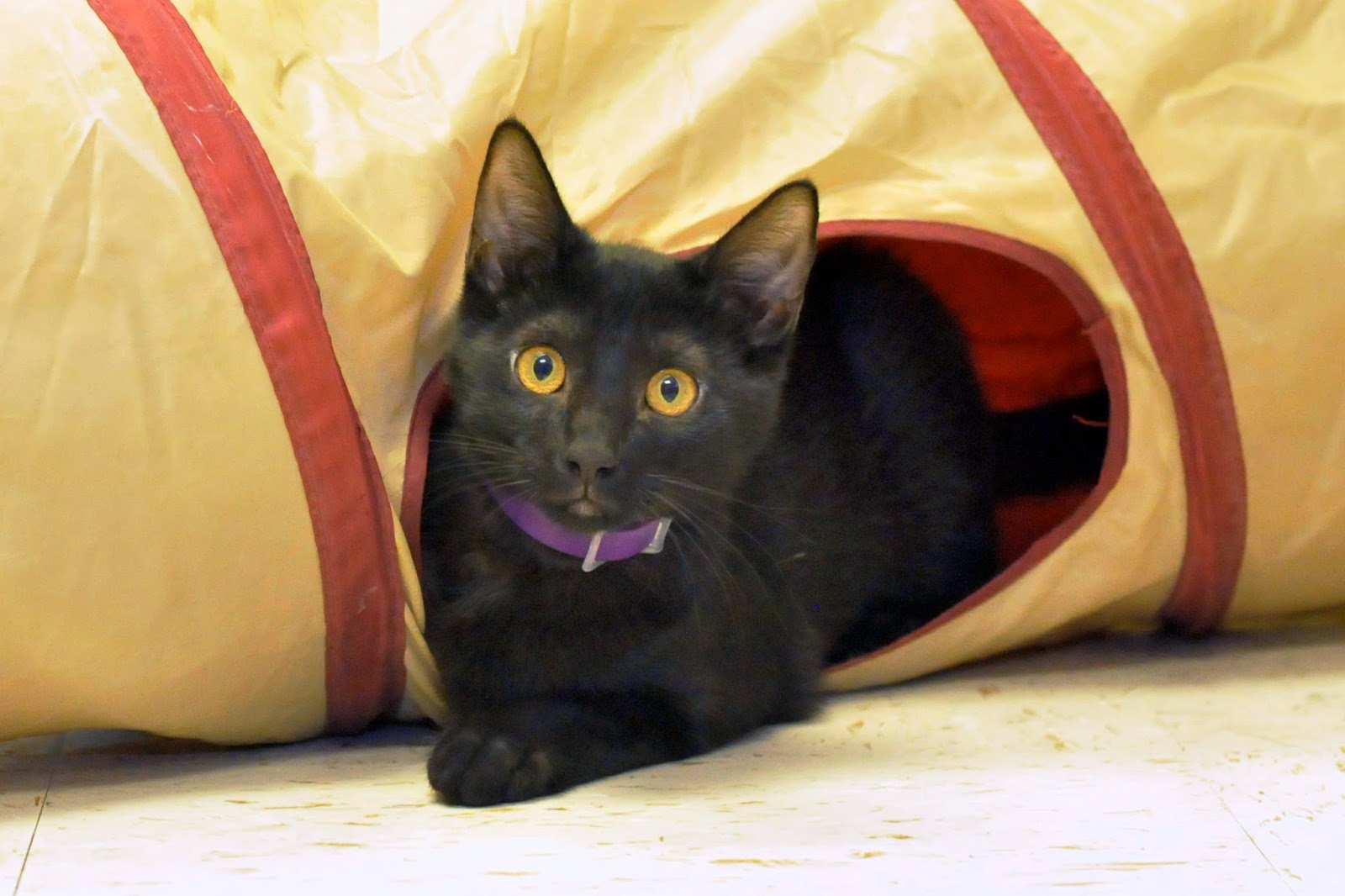 By looking at the photographs you would never know just how active and fun she really is.  Because even kittens have to rest now and then I was able to take this photograph when she paused during a rousing game of "tunnel fun". 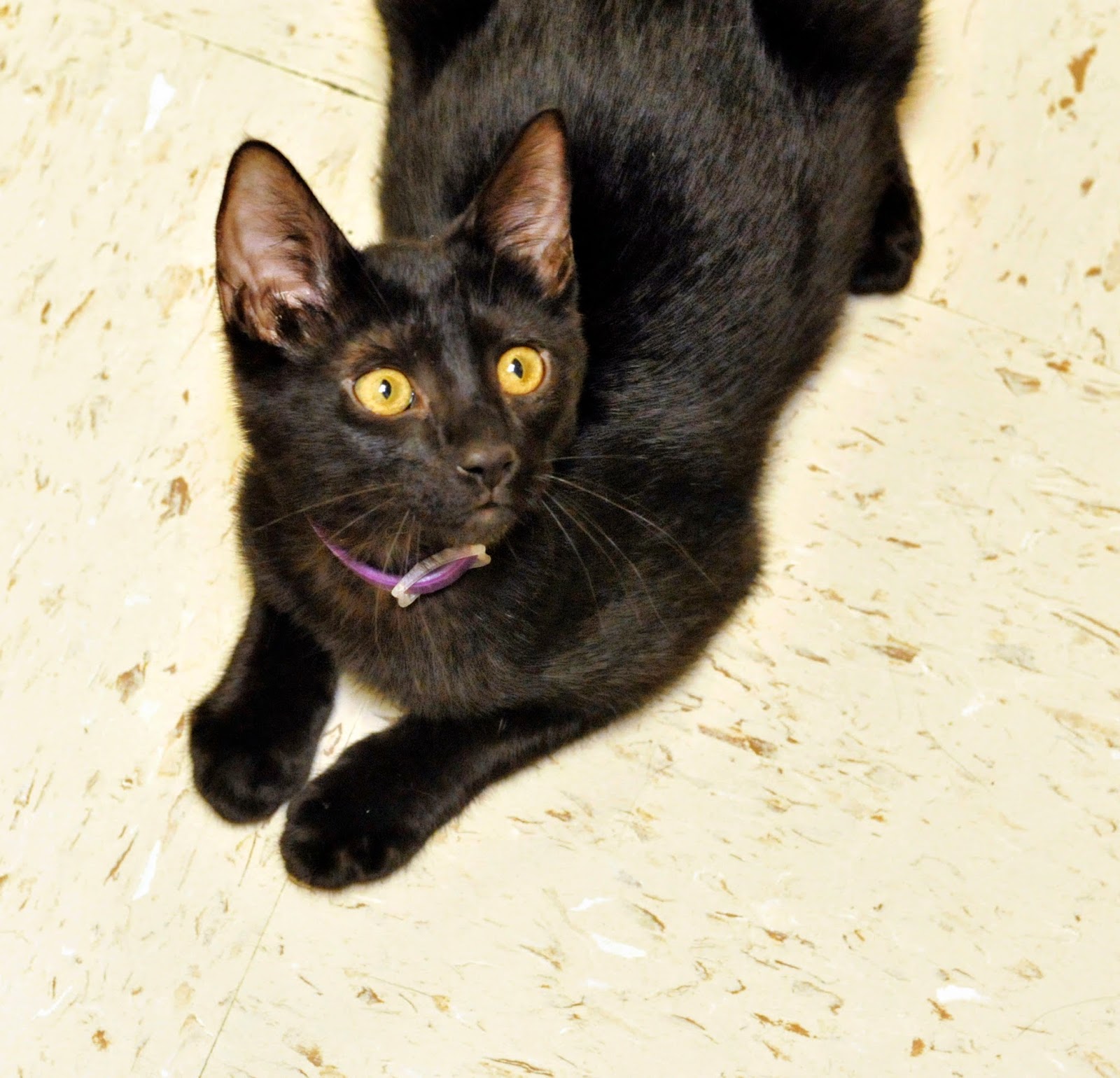 She has been to the vet,  has had all of her tests and shots, and found to be very healthy!  She has also been spayed!  Upon adoption she will be micro-chipped with her new owners contact information.  StreetCats will pay for her first year's registration with the HomeAgain program.

Posted by Vickie Sanborn at 8:07 AM No comments:


This is our very handsome cat, Alfred!  Alfred is almost 2 years old. When he was in foster care, prior to coming into the StreetCats shop, his foster mom said that he was affectionate, but shy.  Another thing that his foster mom discovered is that he does NOT like vet clinics. Not many cats do, but I guess his dislike is very strong.


He does seem very shy and likes to stay close to a “hidey - hole”, as we call them.  But his all time favorite place to sleep, and hang out, is in our over head cupboards where we store cat beds, blankets, and towels.  As we know, cats do not have thumbs, but somehow he has mastered his skill of opening the cupboard door latches. He really likes sleeping up there and seems determined to continue. 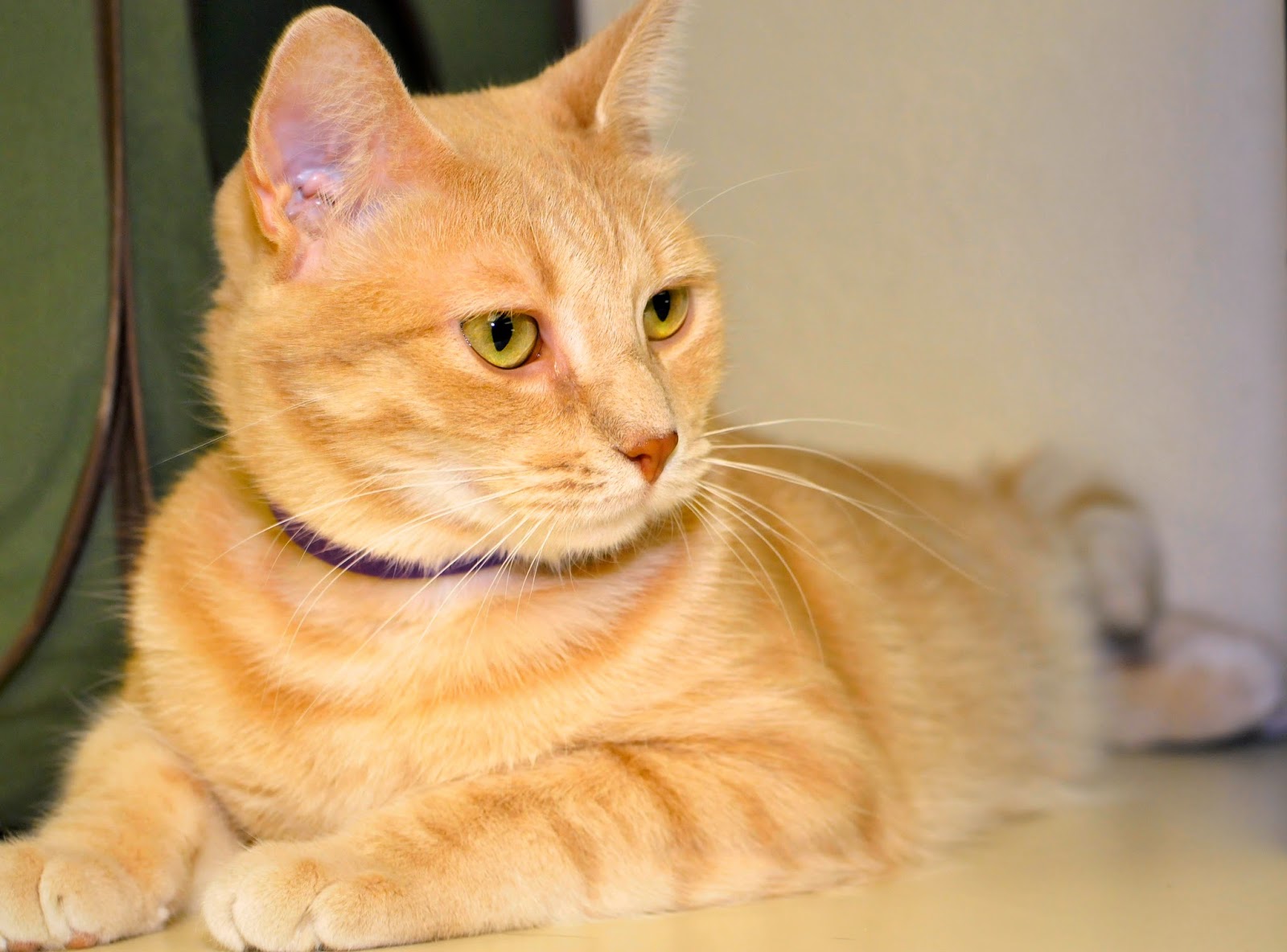 Alfred is healthy!  He has been neutered, has had all the right tests and has been given his shots. He will also be micro-chipped with the new owners contact information upon adoption. StreetCats will also pay for his first year’s registration fee with Home Again.

A Variety of Theories

I am so confused right now that I need to stop and think a bit about what I'm doing.  Okay, we have two contests going right now.  Okay, one is over and one isn't.  So I think I'll write about the one that's over!  Now I'm not confused any more.  The other contest isn't finished because the cats BEGGED me not to declare a winner yet.  They want to continue to show me how good they are at what I'm measuring.  Each one thinks they do it best!  That probably doesn't make sense to you now, but I bet it will later.  Now I bet YOU'RE confused!  I'm sorry.  Just disregard this paragraph!

Okay, on to our contest and its winner.  I decided to have a best yawner contest.  And boy do we ever have a winner.  Her name is Julianna and you met her last week with our Feline Friday post.  Man, she's beautiful and can she ever yawn.


Now here is a question for you about why cats yawn.  You may pick the answer you believe is correct.  Cats yawn because

a.  They are giving you an honest opinion about what they feel is going on.  They're just plain bored!

b.  Their blood oxygen levels are low and they need to suck in some air.

c.  The cat is tired but is forcing himself to stay awake for some reason by yawning.

d.  They are displaying their teeth!  Grr!  Look how fierce I am!

e.  The cat needs to stretch his jaw muscles?

So if you want an answer to this question, don't look at me!  I don't know!  Maybe someone will write a comment and give us the real answer.  But really, do you suppose anyone but Julianna can know for sure why she yawned?  Does she even KNOW why she yawned?  I think I'll ask her.


Oh, better not ask her right now!  She's snoozing!
Posted by Unknown at 2:44 PM No comments:

Julianna, or Julie for short, is a gorgeous long-haired calico!  She is mature at 8 years old and has been declawed. She is good with kids and also with other cats!  Dogs...well probably dogs, too! 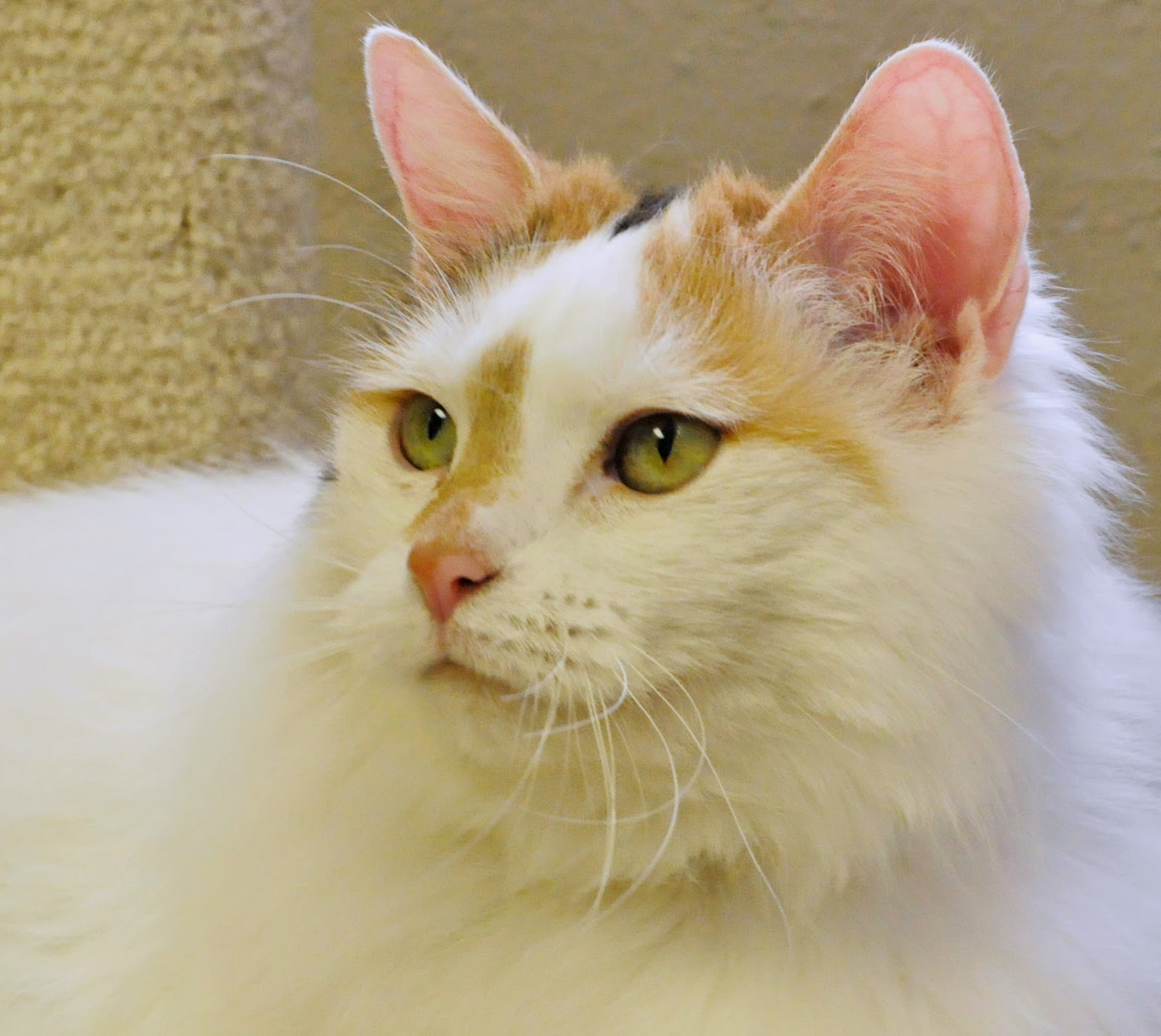 She loves to play and seems to be very friendly and affectionate.  Her favorite pastime is being brushed and petted. That beautiful fur of hers needs to be brushed every day and you won’t get any arguments from her!  She even loves to have her tummy brushed and has the purr to prove it!

She was rescued by one of our volunteers, so we don’t have any history on her. What we do know is that she’s healthy! She has been to the vet, has been spayed, and is up to date on all of her shots. When she is adopted she’ll receive a micro-chip just under her skin with her new owners contact information on it. StreetCats will also pay for her first year’s registration with the HomeAgain program!


Posted by Vickie Sanborn at 12:00 AM No comments: