Bebe is a sweet little girl!  She is a brown tabby, has all of her claws, and is about 6 years old. 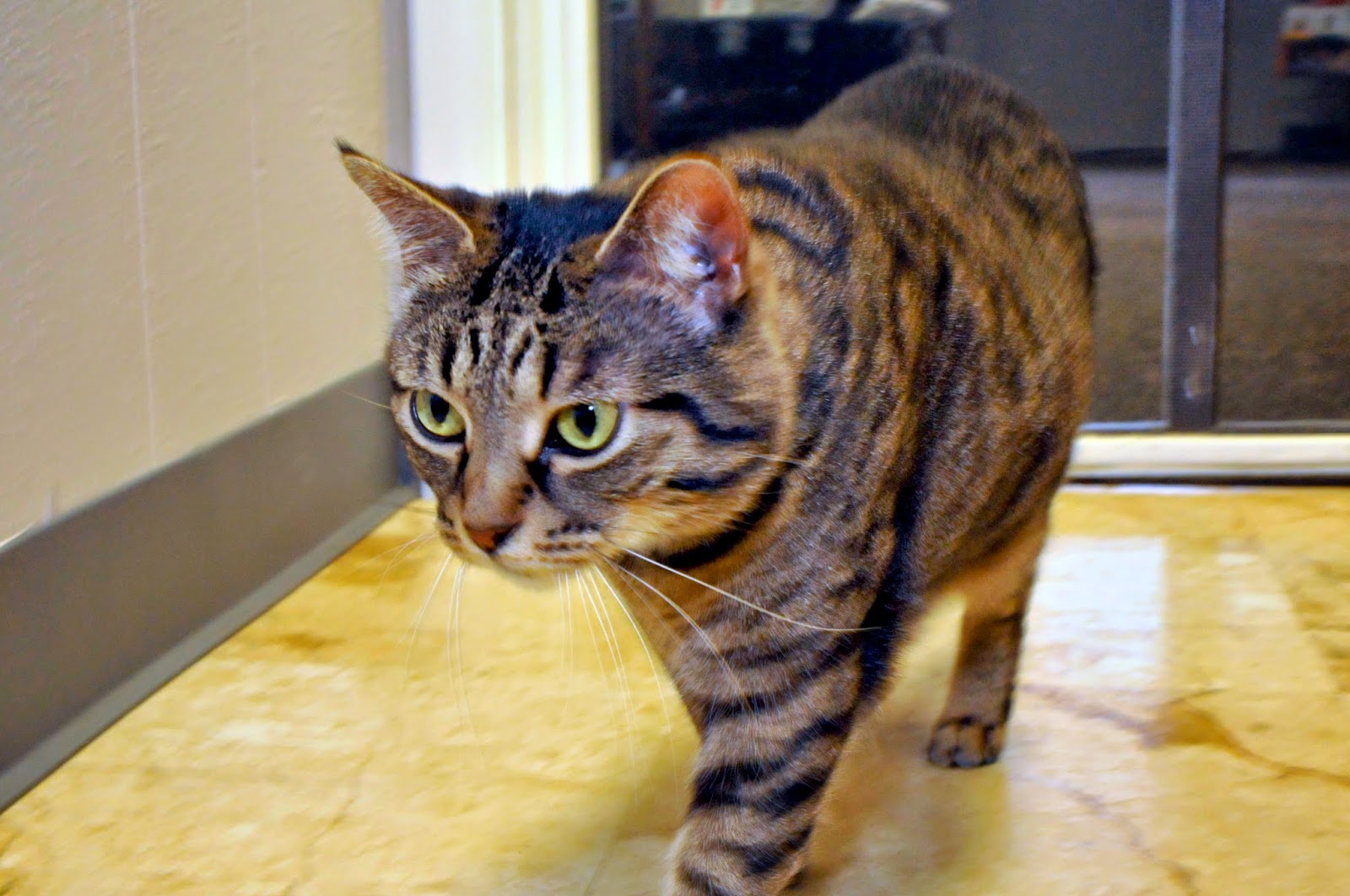 She gets along with other cats, and dogs, too!  We don't know yet how she gets along with children.
She is laid back, friendly, and just a little bit shy, but loves to be petted, held and cuddled.  Her owner described her as a lap cat. 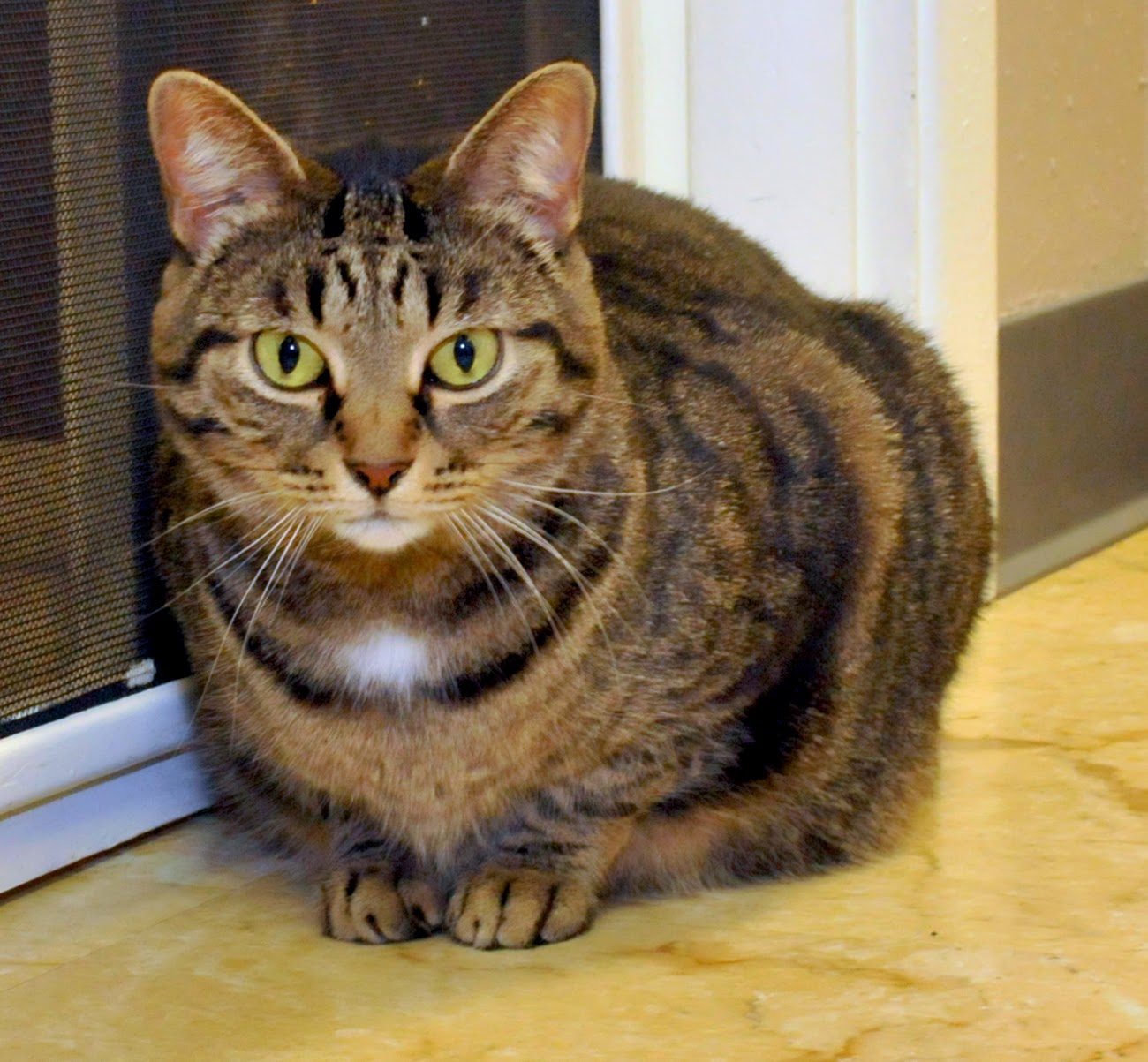 Bebe is dressed for success in her classic tabby necklace, or circular stripes as some call them, around her neck.  Her necklace looks as if it contains a beautiful jewel pendant!

Bebe was returned to us along with her kitty friend, Arnie, because unfortunately the owner became ill and had to move in with others and wasn't able to take the cats with her.  Her friend Arnie has been adopted and we're hoping that soon Bebe will be, too. 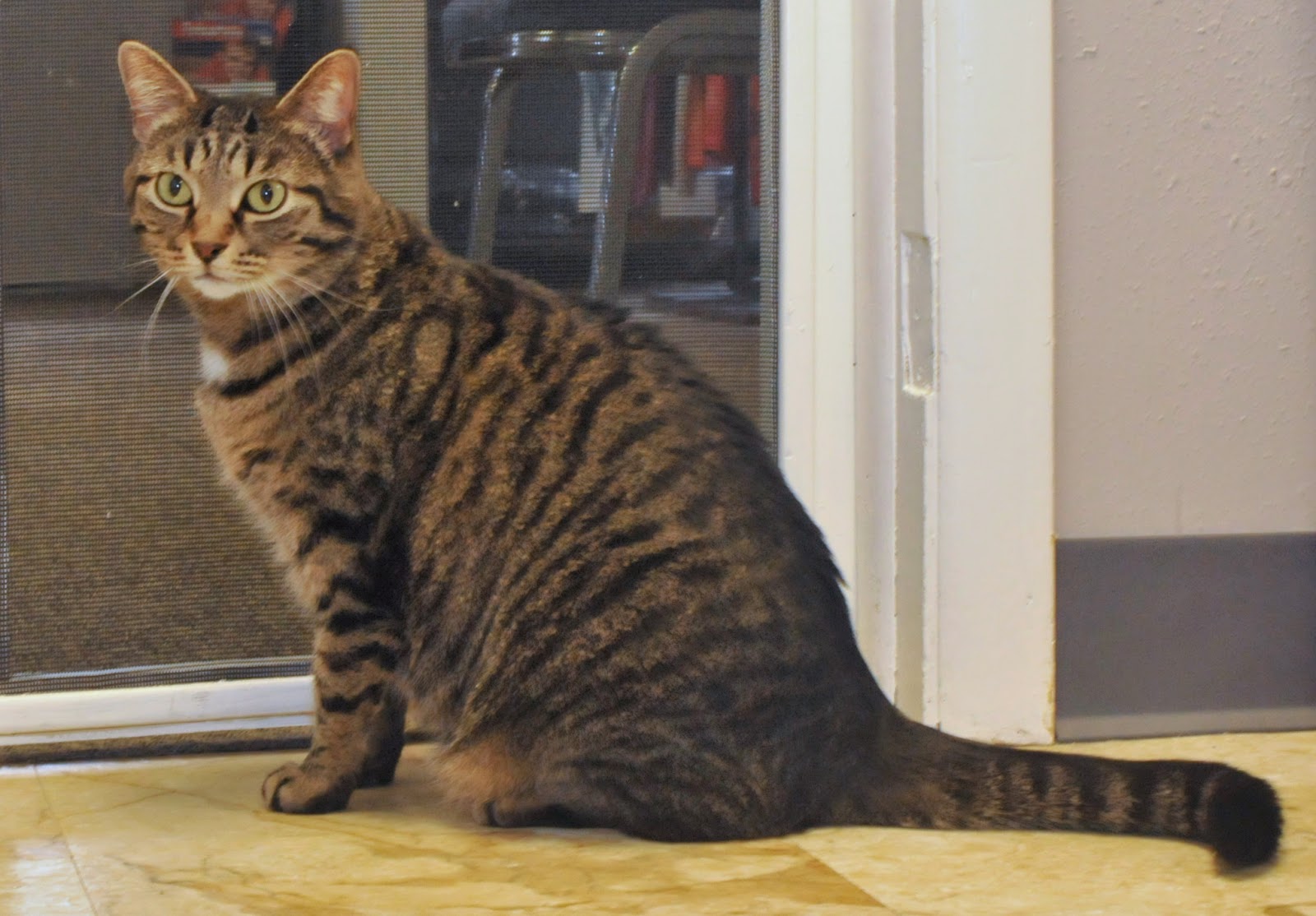 Bebe has been to the vet and declared her healthy!  She has had all of her tests and shots and is ready for adoption.  She also has had her teeth cleaned!  All of StreetCats cats are micro-chipped when they are adopted.  The new owners contact information is entered onto the chip and then it's registered to HomeAgain, A lost pet's best chance.  The first year's registration fee is paid by StreetCats. 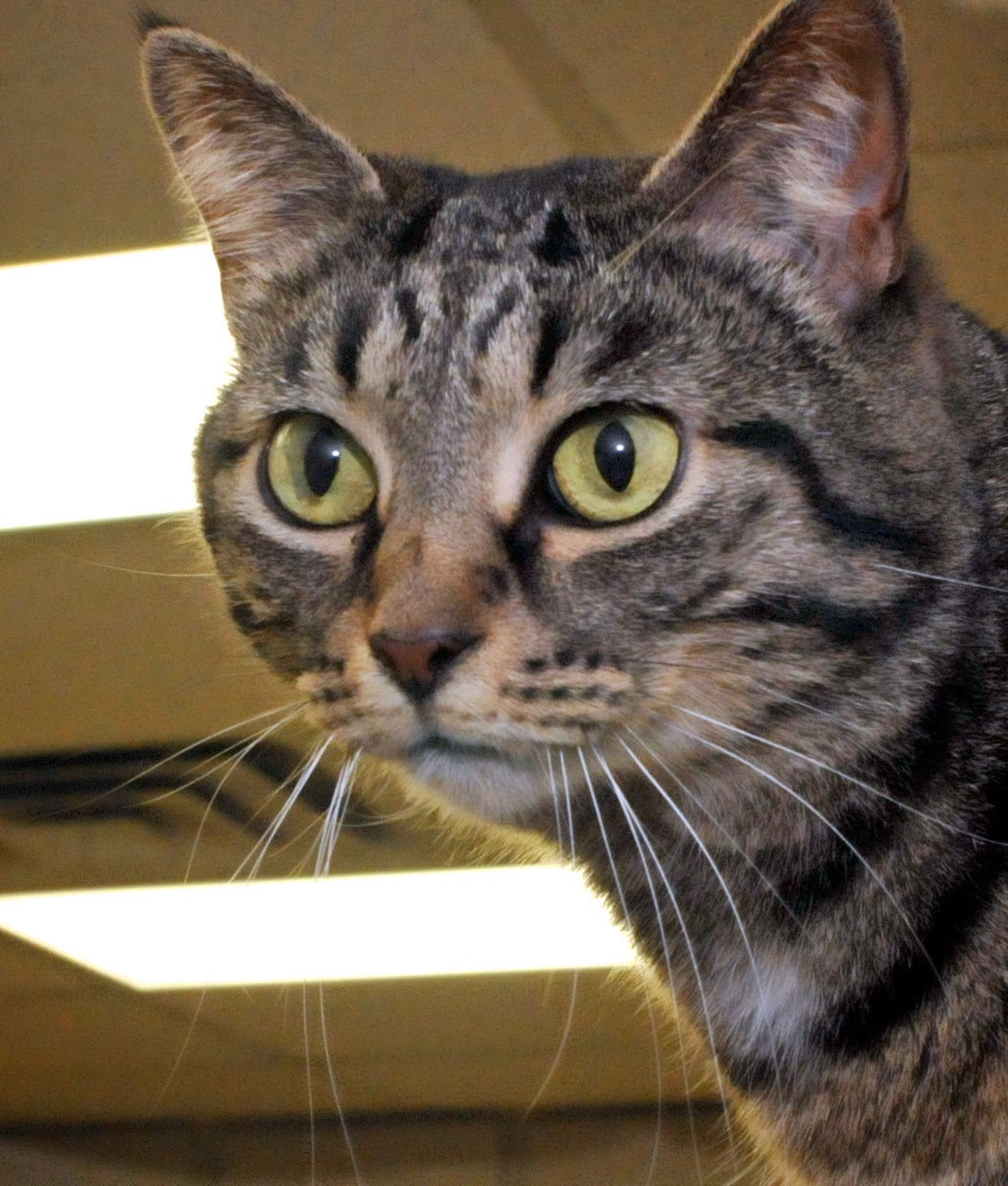 If you would like to meet Bebe please stop by our shop at 6520 E. 60th Pl. in Tulsa between the hours of 10:30AM and 5:00PM Tuesday through Saturday.  If you have any questions about Bebe, our other cats, or anything about our organization please call our message line at 918-298-0104 and leave a brief message.  Someone will call you back who can help with your particular questions.  So come by the shop and spend a little time with Bebe!  I'm sure that she would love to meet you!

Please "Like" us at www.facebook.com/streetcatsinc.
Posted by Vickie Sanborn at 7:42 PM No comments:

TO BE OR NOT TO BE

No, wait!!  That is definitely NOT the question!  I am!  And I intend to continue to be!  The question is what I SHOULD be!  Yes, of course I know I'm a cat!  But what I need to know is whether it is more noble to be King of StreetCats or President of StreetCats.

Yes, I know, I have already anointed myself King, but one of the humans asked me the other day if I was named after President Truman.  Not knowing what she was talking about I went to the magic machine in my office and looked up "President Truman."  Well, excuse me, but why would I be named after him?!  He was a human, I am a feline.  And, quite frankly, there is not a lot of similarity between the two species!  Gee whiz, I have four legs, he had two!!  But even if you ignore this species difference, there are other things to be considered.  He was born in Missouri, I in Oklahoma.  He had poor eyesight!  Well, okay mine's not all that great either, but at least I can adequately sniff things out.  Humans have terrible noses!!  And they are so insecure!  Did you know that President Truman bragged about having read every book in the Independence, Missouri, Public Library?  And he loved music and played the piano??  I don't need to do any of those things to prove that I'm wonderful.  I just know it!!

But here is the most critical difference between President Truman and myself.  Now how can I put this delicately?  Look back at my picture on my last blog post.  Got it?  Now you cannot deny that I am one handsome dude!!  I know that. Beauty is in the eye of the beholder they say, but come on. Beholder, it cannot be denied!  I am gorgeous!!  And President Truman??  ??  ??  And besides that, for a human he was not the biggest specimen, maybe 5'8'.  I am a large, handsome, outstandingly attractive cat!!

Now that we've settled that I could not possibly have been named after President Harry S. Truman, I will say that the question sparked my interest enough to explore the possibility that President would be more noble than King.  I mean President is powerful!!  Well, I learned that Presidents have to be elected.  This could be my very first problem.  And even if you're elected you don't get to just tell people what to do.  They have to vote on stuff.  And here is the really bad part.  If I did something bad (not that I would, of course) I could get thrown out of office, AKA impeached!  Well, I just made my decision!  I shall continue to be King!  Now bow down!!

It has come to my attention that, as King, I will need a court.  I think I'd better start working on that.  Maybe a prince or two, a princess, a court jester to make me smile . . . a Queen?  Whoa!  Not too fast!!
Posted by Unknown at 1:45 PM No comments:

I wrote a post about recent adoptions at StreetCats on February 19th.  Seven weeks have gone by and adoptions don't seem to have slowed down!   In the past 7 weeks we have adopted out 10 cats!  That's about 1 1/2 cats per week. I'm not sure which cats were halved, but I'm sure no animals were injured in the writing of this blog entry.

We are all so happy for Holly Hope!  It's been tough going for her regarding adopters, but at last she has found her forever home with one of our own volunteers! 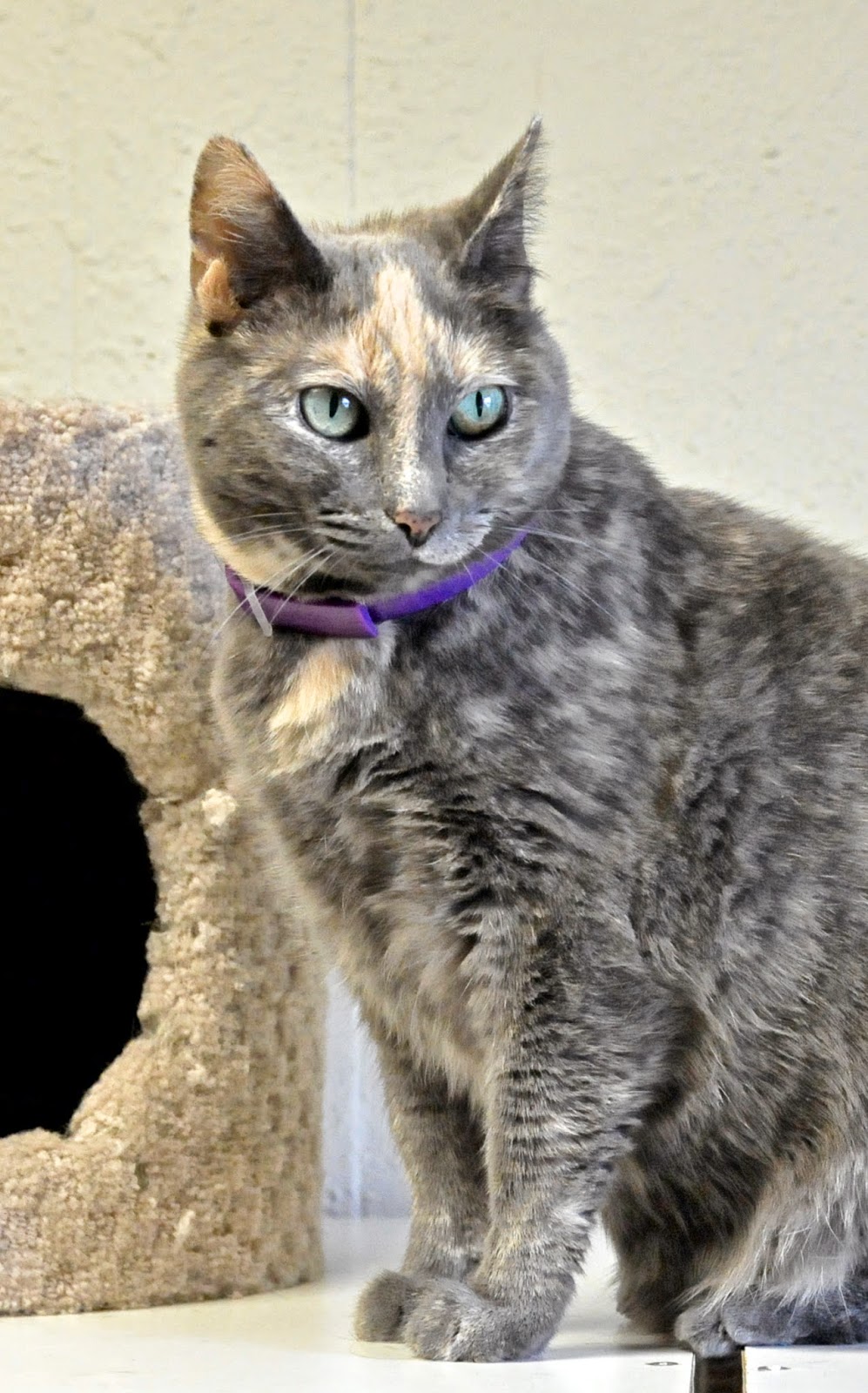 During this 7 week period Zoe, Zorro, and Slick were adopted.  All 3 kitties were in and out of the shop so fast that I didn't get a chance to photograph them!

Gigi was adopted.   We had her before and she was Cara.  Due to unfortunate circumstances she was returned to us.  The good news is that she was adopted about a week later! 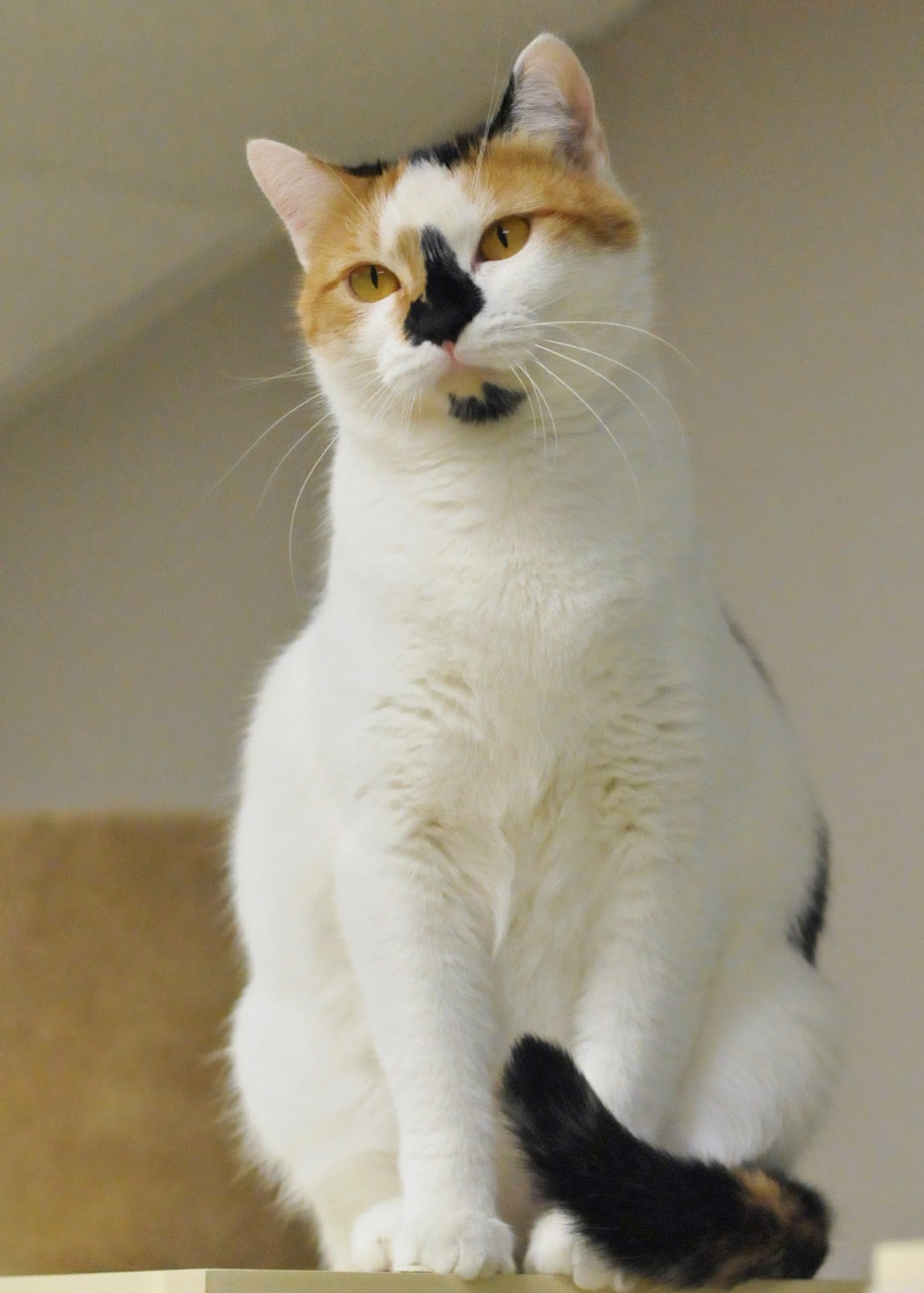 And then there was the very lovely Cleo! 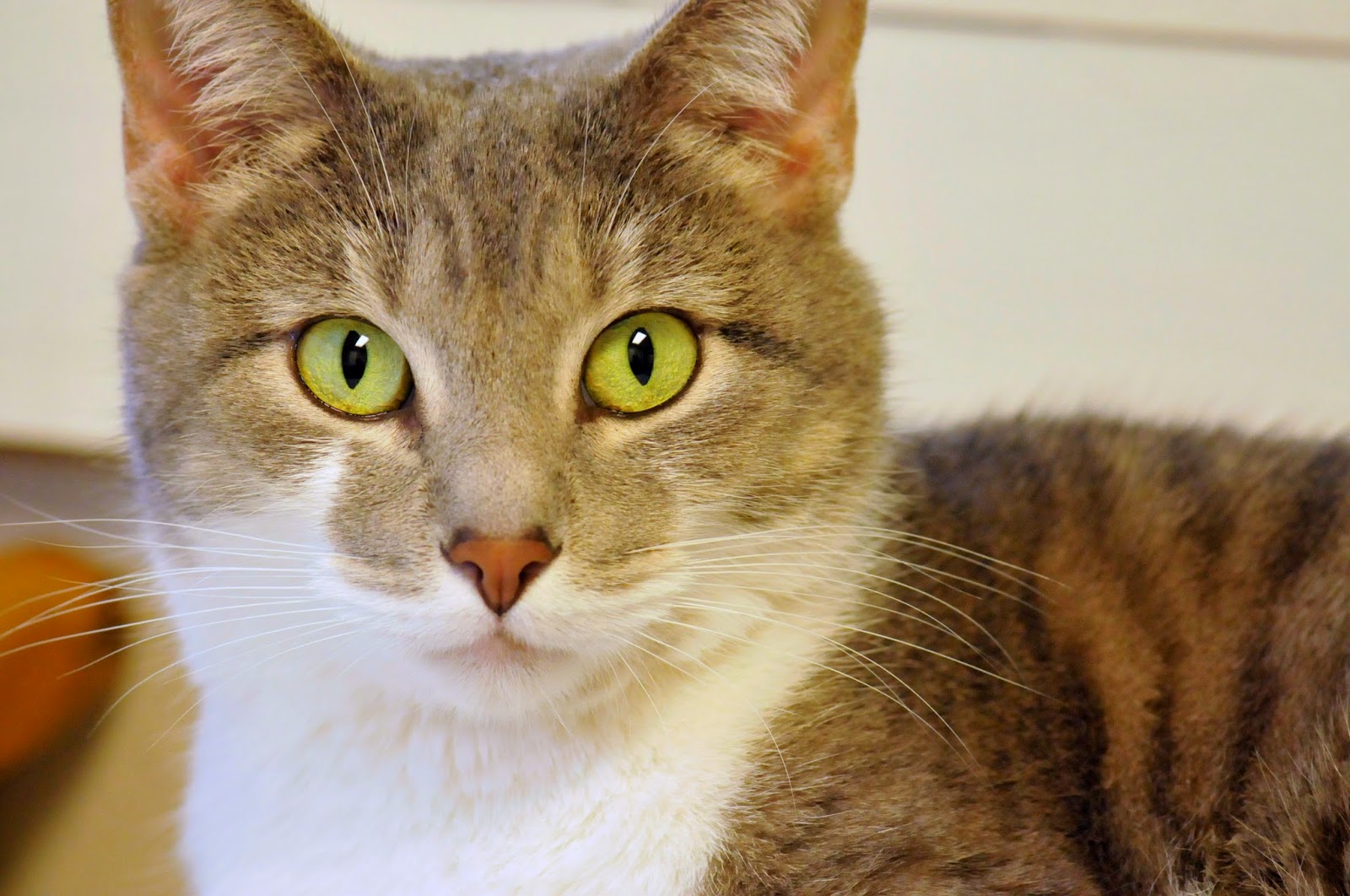 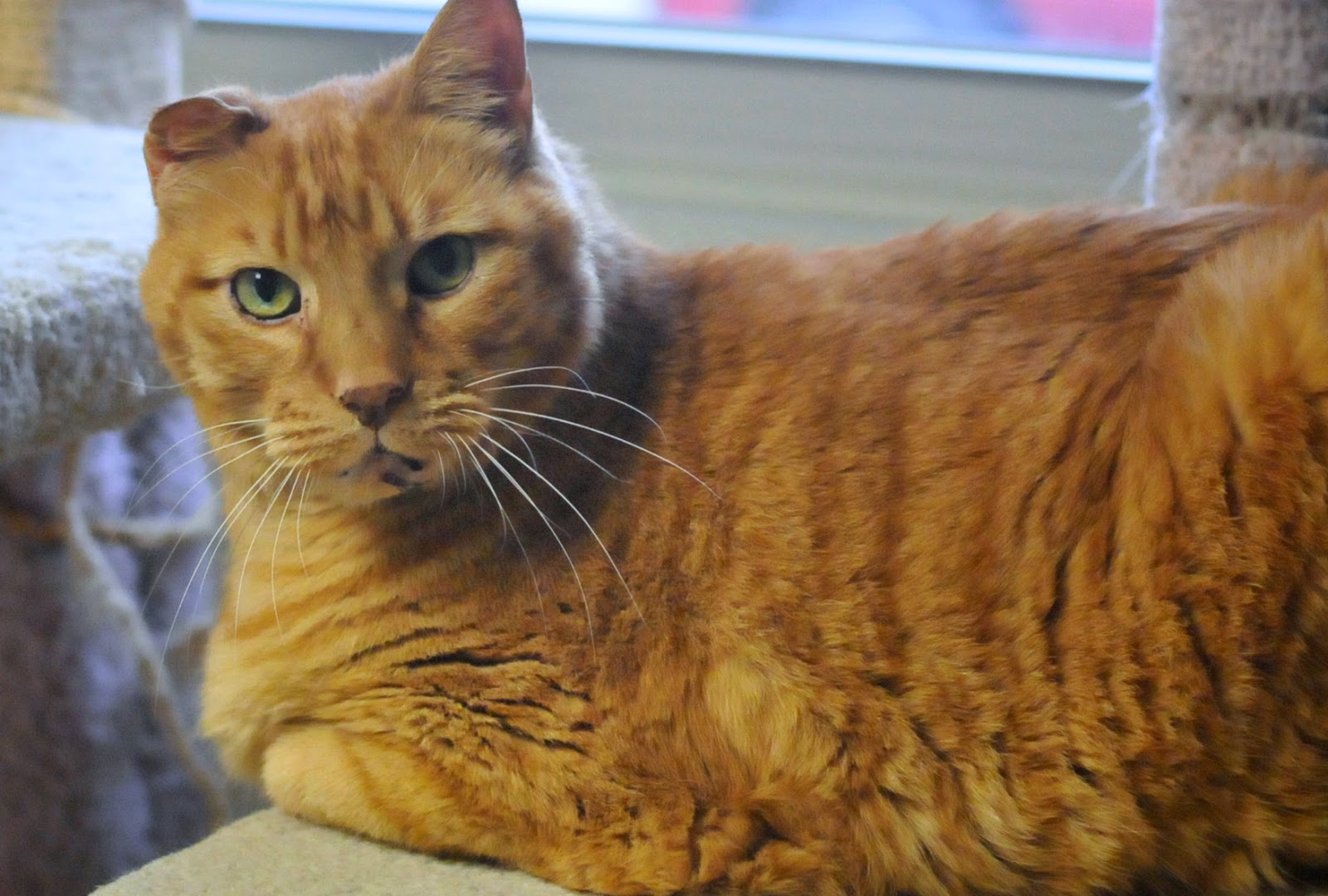 Sisters Ellie Mae and Emmie Lou were adopted together!
This is Ellie Mae.... 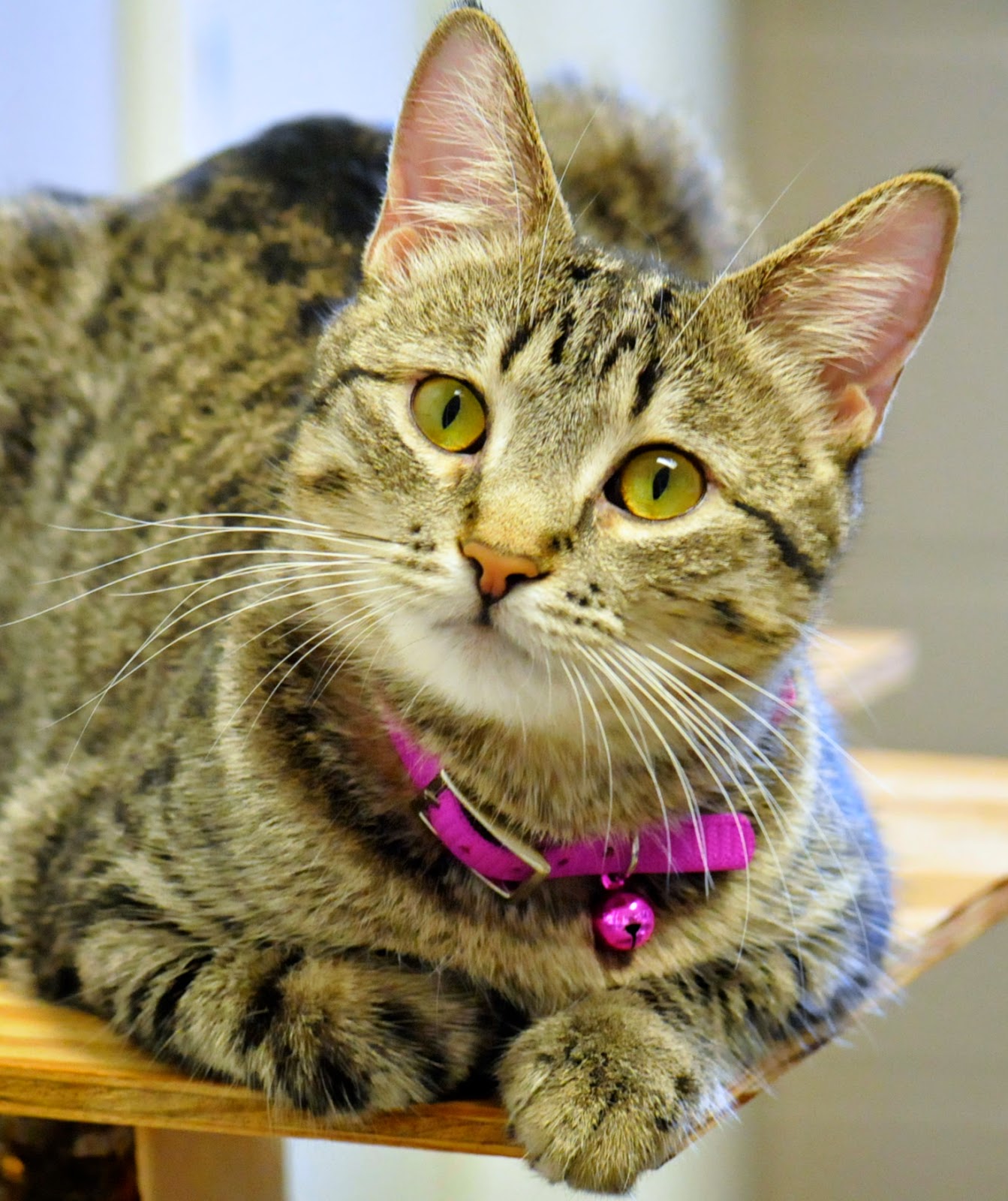 and this is Emmie Lou! 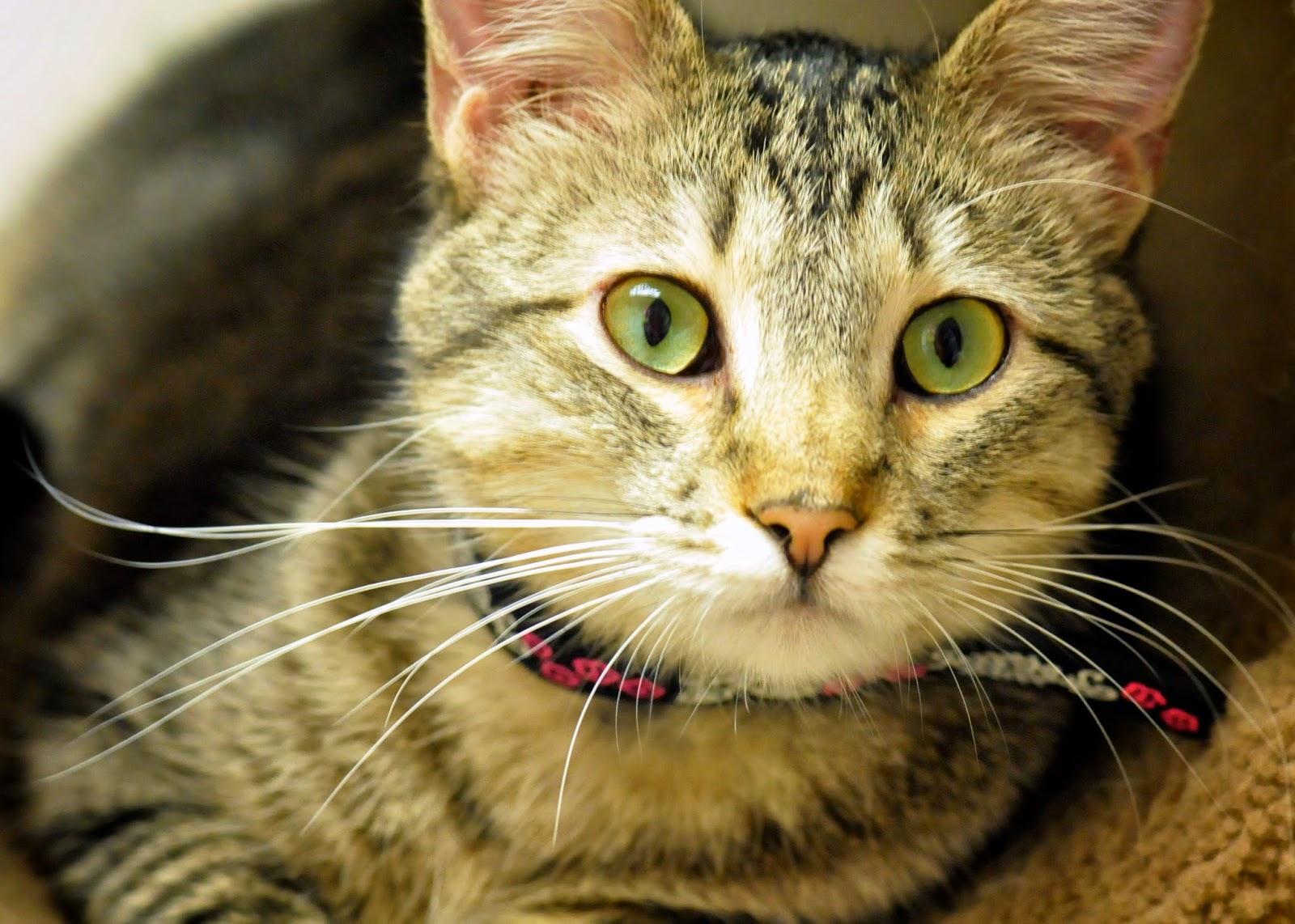 Last but not least of the recent adopted kitties is the very handsome Frankie. He was fostered by our volunteer Patti Roberson.  This sweet guy was only at the shop for a week! 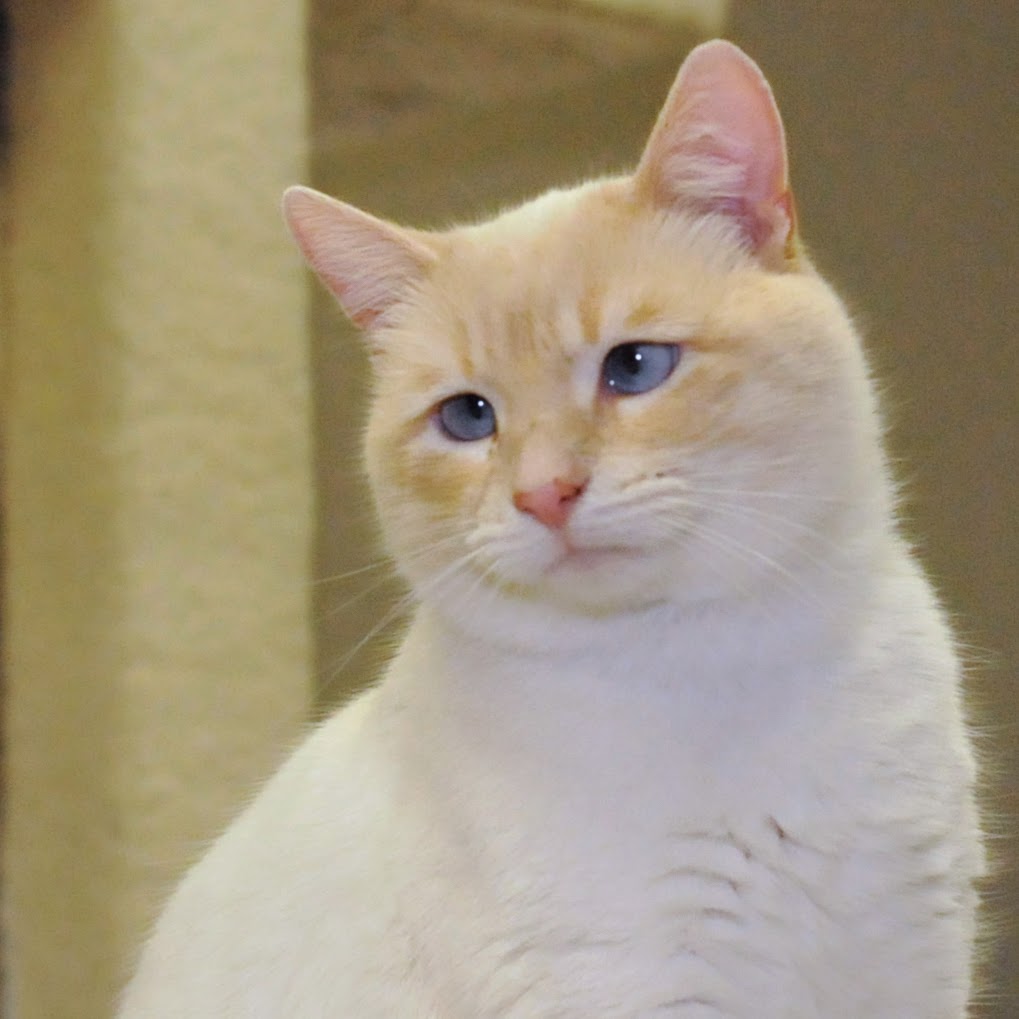 So there you have it folks, 10 cats in 7 weeks!  Even though we have been very fortunate in helping these kitties find new homes we still have several kitties at the shop and more that are waiting to get in the shop.  Please stop by and visit us at 6520 E. 60th St., in Tulsa.  It is on the east side of Sheridan behind Charlie's Chicken which is a block north of 61st.  We are there Tuesday through Saturday from 10:30 until 5:00.  If you have questions please call our message line at 918-298-0104.  And please visit us on Facebook at www.facebook.com/streetcatsinc.
Posted by Vickie Sanborn at 7:29 PM No comments:

Isn't this what kings do, say "Hear Ye, HearYe?"  It has been over two months now since I declared myself King of StreetCats and I know you've been wondering where I've been.  Well, just picture me sitting on my throne, otherwise known as the table, in the StreetCats office.  And picture me with a somewhat perplexed look on my face trying to figure out what it is that kings do!!  I know we're supposed to look regal and I've got that down!!  I know how to look both very handsome and very regal!  There is no question about that!!  Just look! 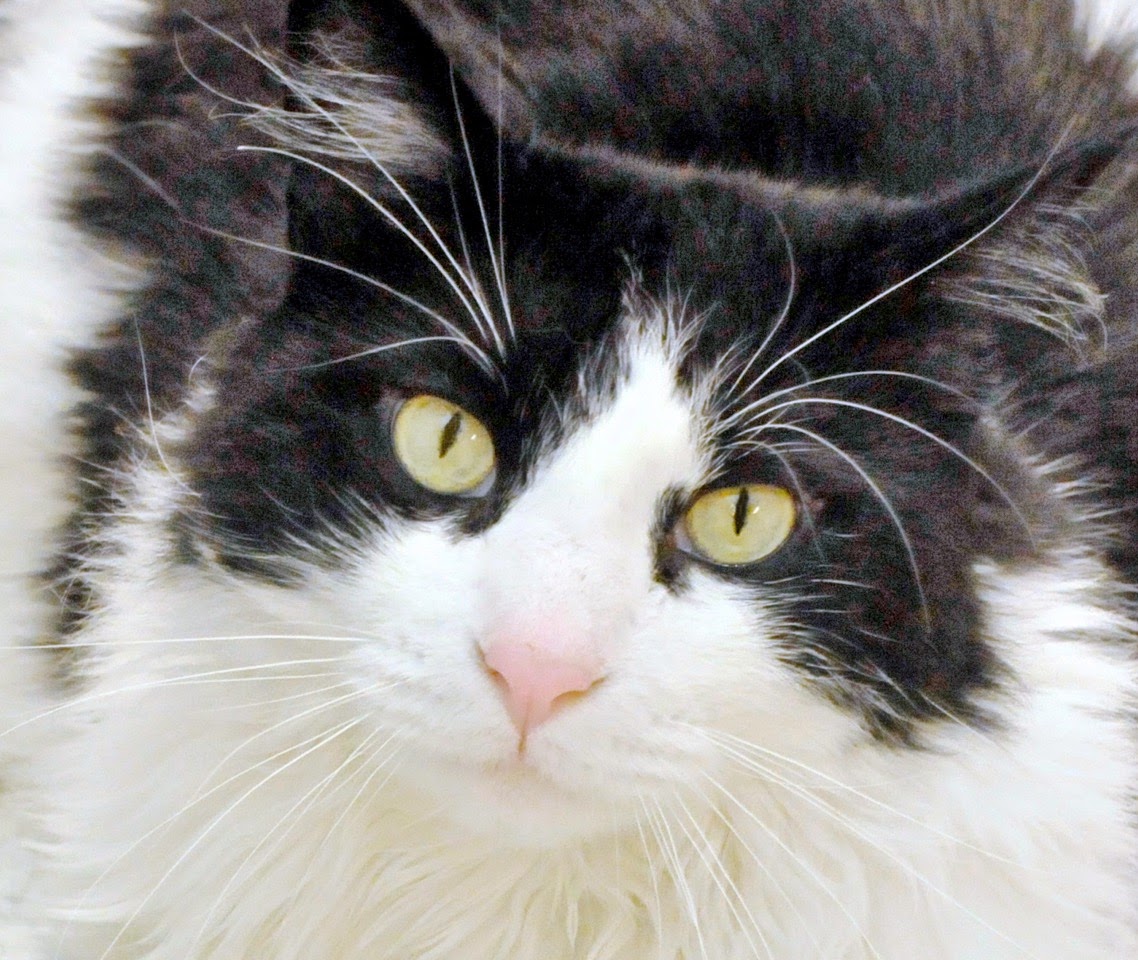 And I'm telling you that there are a lot of kings out there that don't look so good.  And even some queens.  I mean, really!  Now the King of the Jungle, he's a handsome dude, but some of that human royalty??  It's quite obvious to me that they were born to the crown, because they sure didn't get there through their looks!

And I thought the king was supposed to make rules and then everyone would obey them.  Isn't that your understanding, too??  Now the other morning I strolled out of my office to survey my kingdom (kings do that, too!) and you will never believe what I found.  It was such a bad mess that I can't describe it!  So I'll show you! 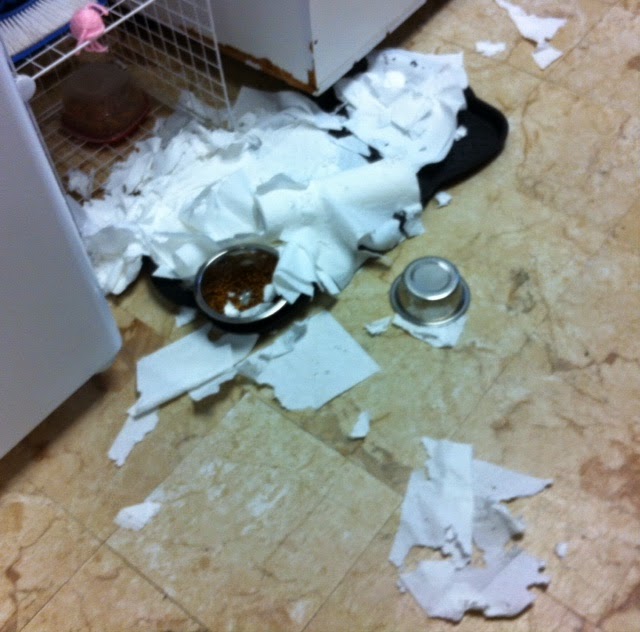 Now did I tell anyone that it was a good thing to get into food and tear up paper towels??  Was I asked if such behavior was acceptable??  I blame Bobby and Wally for this mess!  If you don't remember who they are scroll down to the Feline Friday entry about them.  Now they are handsome young cats, maybe even handsome enough to be princes, but aren't they supposed to defer to the king in all matters??

Perhaps being king is just not all it's cracked up to be!  I think I'm going to reconsider this self-anointment.  If I can anoint myself, I can un-anoint myself.  Right?  Maybe instead of being the King, I'll be the President.  I'm going to check into this.  But before I do that, I'm going to give you one piece of advice.  If you want to be King or Queen of anything, think very carefully, especially if it involves being in charge of CATS!!
Posted by Unknown at 9:37 AM No comments: